Send report
response sound quality
Not bad, but inadequate packaging - delivered already dented
Andy HornBlower, 21.12.2018
It arrived in just a thin bubble bag, in a box with the rest of my order. These dent really easily, and to prove it, mine came with a dent pre-installed.

It's not bad, and compares pretty well to a Harmon B I own, except for the fact that the Harmon came in a simple, no doubt very cheap, but perfectly adequate cardboard box.

All the Denis Wick mutes I've bought came in a cardboard box too, as did the Jo Ral ones, among others.

For some reason, this manufacturer didn't think it was worth spending the tiny amount of money to package it properly, so that I could be the first one to provide it with a dent, instead of having it delivered that way.

I can push out a dent, so I did. It leaves a mark, and it's never perfect. I could have returned it, but I didn't want the hassle, and I don't see it as being Thomann's fault.

Yes, it's a decent mute. No mute gives you perfect intonation - any one who claims theirs does is a liar, or at best, deluded. This one doesn't either.

It makes a nice tinny, almost Miles Davis, sort of sound. No complaints there.

It doesn't stay in all that well, but then they mostly don't, and it very much depends on the particular trumpet or cornet. I tend to strap them on, to make sure.
Helpful · Not helpful · Report
Report rating…

Send report
response sound quality
Excellent A*
Tom3107, 06.05.2014
This mute is a superb addition to my my collection. Do not let it's weight (or lack of) sway you from it's quality.... Aluminium is meant to be this light. It is strong and well made, and a rival to Denis Wick mutes, but at a fraction of the price. The tone quality is immense and it is a well defined sound. Could not recommend this more!!!!!
Helpful · Not helpful · Report
Report rating… 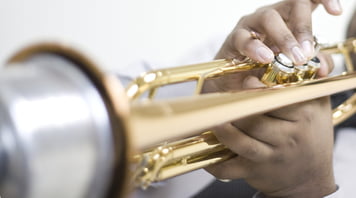