Pros:
- Features! A lot of them. First, the top control panel has a 3 band EQ (which is not that common in a valve amp at this price), plus the ISF which is really handy. Think of a Metallica tone on the American side and a AC-DC tone on the British side. The clean channel has just a tone knob, but you can live with that, since it has 2 voices. Reverb is good solid sounding, and it works for most situations, but don't expect something airy, ambient crazy big. The voice switches are really good as well, giving you a wide palette of tones.
- The power reduction switch is one of the best features. I play it in my bedroom, in an apartment, so I need something that is not loud, that delivers power at low volumes, and this amp really does the job. I use it most of the time at 0,5W mode, which is loud enough for my playing, but quiet enough to not disturb my family and neighbours. The 5W mode can be quite loud if you really want that saturated valve tone.
- The back panel has even more features. The effects loop works as a charm, and it's really handy for time based effects and for noise gate (the amp distortion is noisy). You also have emulated DI out, USB for recording and MP3 input.
- Now, one of the most important features for me is the emulated headphones out. It was the decision factor that made me buy this amp. I use headphones a lot, specially at night, and a good sounding headphones out was a non negotiable feature for me. Before this amp, I even bought a Joyo Bantamp Vivo to test it, and ended up returning it because its headphones out was really bad. I didn't test a lot of amps, but researching online made me get the conclusion that the Blackstar amps have the best emulated headphones out in the market for valve amps. It's awesome!
- Sound: I don't have many years of experience with amps, but for my ears, it sounds really good! Both in the headphones out, and in the speaker you can get really nice valve tones, beautiful cleans and heavy saturated overdriven tones. Very versatile. It could benefit from having a better speaker though, but it would increase its price.

- Not many to be honest. Being very picky: I play mostly metal styles, and I think this amp could have more gain on tap, or a specific modern metal voice built in. Even at the maximum power and gain, I still feel it could have more oompf! Works great for classic metal, but not so much for modern metal. Blackstar had a Metal version of this amp some years ago that was really good, unfortunately they discontinued it. You can stick an overdrive or a distortion pedal in front of it and solve this issue, but this amp is not a metal high gain amp. I would have bought a metal high gain amp if I could find any that has the features that this amp has. I couldn't find any.

- The foot switch that comes with it is made out of plastic (the previous versions were made out of metal) and it feels cheap to be honest. But since I use it only at home, it doesn't bother me that much.

Overall, a great amp for home use, probably the best. Sounds good on it's own and it's a great pedal platform. Needs some tweaks to achieve a modern metal tone, bot for all the rest, you will be set!

Edit: After the honeymoon period has passed, now I can offer a more accurate review. My opinion didn't change so much, this amp is really good! But playing it for a little longer made me realize that its sound and overall tone is lacking a little bit. Specially on the OD channel, which I think is very dark and muddy, even with the treble all the way up and the bass all the way down. I don't know, it lacks balls and character. Also the cabinet size being so small, it sounds boxy in most situations. Maybe changing the speaker would help on that.

Tone is subjective, and I realised this amp was not my cup of tea. Sold it and got a Marshall DSL40CR.
Helpful · Not helpful · Report
Report rating…

Soundwise, it covers a great amount of different tones and can provide you a lot of fun. You might, however, miss a bit the classical sounds that a EL34/84 or 6L6 can provide you.

The volume is quite loud, even on the 0.5w mode. Be careful no to annoy your neighbors. The drive channel is different than what I am used to, but it sounds very nice with my Fender Strat.

As for the USB output, it can come in really handy and has an ok quality. The signal is not so strong, so that might bring up some noise. Speaking of noise, I experienced some digital noise due to the connection with the PC on some of my recordings :/
Helpful · Not helpful · Report
Report rating…

Send report
handling features sound quality
Great for the money
jollyca, 07.06.2021
I'm just a hobby guitarist - no gigs, no jams, just me and my backing tracks. I turned to the HT-5 for two reasons: I wanted a tube amp (I don't necessarily need it, mind you) and I wanted one that had a power reduction feature. I also had a small Blackstar Fly3 for practice and I liked the sound. I also don't have a lot of experience with amps - I only had a Fender G-Dec Junior and the small practice amp I mentioned above.

I used it with both my guitars (budget models): a Squier Strat and a Harley Benton Fusion II HH.

What I love about it:
* The OD channel sounds superb. You have great control over your tone with the eq and you can also switch between two voices
* The power reduction feature works like a charm and makes the amp usable at bedroom levels. I find that 0.5W is more than enough
* The emulated output on the phones (I use it like this, mostly) sounds impeccable, especially if you have a decent pair (I have a Beyerdynamic DT-770).
* There are tons of output capabilities - XLR, emulated headphones, USB.
* It comes with a footswitch and you can switch between the channels and the "voices" (two for each channel).
* It has an effects loop. I'm not sure how much this is worth for you bedroom players out there, but if you plug a Looper pedal in the FX loop you can stack clean and crunchy loops, a trick only recently I learned about.
* The reverb is a nice addition and sounds great

What I don't like about it:
* You don't have much control over the clean channel - only a volume and a tone (which is useless, since you usually use the tone knob on your guitar). I guess you can always plug in an EQ pedal and make the channel shine
* It would've been nice to be able to control the gain of the clean channel because it's hard to dial in a crispy clean tone. If you push the volume past half it breaks up. If you are looking for a clean amp move along, there's nothing to see here.
* The USB is a nice idea but has a lower volume than I expected. I'm not sure why this happens, I tried recording with it and the volume was lower than any backing track every time. I had to use an IR loader plugin (which is wrong, they claim that the USB emulates the speaker).

Bottom line: As a hobbyist, do you need this? Probably not, there are cheaper, solid-state amps out there. But do you want this? Hell yeah, a tube amp is tons of fun to play, it responds beautifully to your playing, and you get to actually practice your playing dynamics.
Helpful · Not helpful · Report
Report rating…

Send report
handling features sound quality
Blackstar HT-5R MkII
Niallos, 14.09.2020
Excellent tones at low volumes. I have been using a quality 15 watt tube amp at home which I struggled to get good tones out of at low volumes. I found the Blackstar HT5 MKII combo to be exactly what I had been looking for.

It has beautiful, rich distortion, with the classic mode being better for my tastes. The clean channel is really impressive, especially when coupled with the onboard digital reverb. I did find the higher gain, modern gain mode to be a little too gritty and not as authentic as the classic mode. The classic gain coupled with a TC Mojo Mojo overdrive sounds amazing, really rich and dynamic and it reacts amazingly with my guitar (Gibson Les Paul) at relatively low volumes.

I use the Ext MP3 connection for backing tracks etc (I would rate this feature as adequate, but not having anything to compare it to I can only say that it's fine for me personally) and I found that my DSP unit works perfectly in the effects loop for time-based effects and looper.

I would highly recommend it for anyone looking for classic rock, hard rock and classic metal tones at low volumes at home.
Helpful · Not helpful · Report
Report rating…

Guitar Setups
The range of available guitars and amps has never been greater than it is today, and a huge variety of sounds are easily accessible.
Interesting Accessories 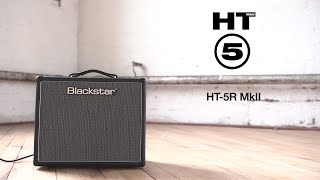 Show all
Guitar Setups
The range of available guitars and amps has never been greater than it is today, and a huge variety of sounds are easily accessible.
Show all
Guitar Amps
The following pages give an overview of the various types of guitar amp available.
test results:
Read review