If you need this product urgently please contact us so that we can find a solution or a suitable alternative for you.

The Behringer Wing is a digital mixing desk with 48 channels that builds on the success of the company’s X32 model. The mixer, which features a user interface with 24 motorised faders and a 10” touchscreen display, also offers mixing afficionados features that include remote control, touch-sensitive rotary controls, high-quality preamps, numerous integrated sound processing plugins, an SD card recorder/player with a marker function, and an optional extension for use in an Ethernet network. A particular feature is that the operating elements can be freely assigned, and stage boxes like the Behringer S16 can also be connected. This bundle also includes a high-quality Thon case – Made in Germany, of course. 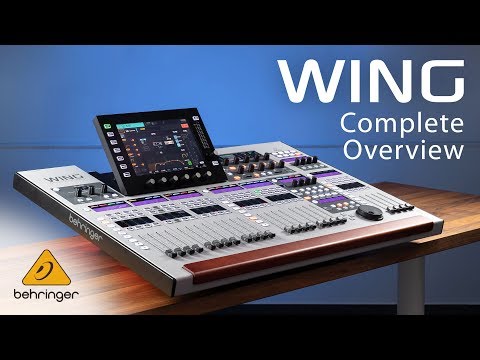 The mixer is equipped with 40 stereo inputs and an additional eight stereo AUX inputs, while its eight Midas ProSeries preamps ensure a high-quality microphone sound. The input channels feature a six-band EQ unit for signal processing, and the WING also features eight standard effect slots and eight additional premium effects per channel with vintage emulations of equalisers, compressors, reverb units, and more, allowing the sound to be fine-tuned even further. A section with freely programmable control elements allows the Behringer WING to be adjusted to suit your personal workflow. The angle of the display can be adjusted to ensure that it is always legible, and its touchscreen function means that detailed work can be carried out on the mixer in a clear and direct manner. On the road, the WING can be operated in the case’s lower section, since the butterfly closures allow the upper section to be completely removed.

For beginners and professionals alike

The Behringer WING’s intuitive operation is great news for beginners (though they will still require some knowledge of the basic principles of mixing in order to use it), while advanced users will find the WING to be a high-performance companion which allows them to individually customise their own workflows. This mixer also includes a range of features for professional users, such as mid/side signal processing, AES ports, and compatibility with WAVES Soundgrid and Dante AES67. The faders are arranged in separate sections of four faders each, giving users of all experience levels direct access to the most important channels in their production at all times. Users working with DAWs can control their software using the mixer’s integrated controller function, which is based on Mackie HUI and Mackie Control. The device’s internal designations for assigned audio sources can be renamed using the WING Co-Pilot app and, once they have been entered, these can be used for various routings across the entire device.

Universal tool for mixing and monitoring

The Behringer WING can be used live as an FOH mixer when combined with Behringer X32 consoles and stage boxes, which keeps the microphone cables short and the signal quality high. When used as part of a network, the WING can operate with cable lengths of up to 80 metres, making it ideal for fixed installation at event locations and as a live mixing desk at medium-sized venues. And the mixer also features a pair of headphone outputs, which means two people can use it simultaneously and makes it perfect for teamwork. Eight line outputs allow the mix signal and sub-mixes to be used for multiple purposes in parallel, such as a main mix, different monitor mixes, and analogue recording. To provide individual monitor mixes, the mixer includes a 32-channel StageCONNECT port to supply compatible devices with sound. The Behringer WING’s “Automix” function automatically regulates preamplification for both active and non-active microphone inputs and thus helps when mixing sound at events with presenters/moderators, at conferences, and in radio broadcasts. The robust Thon case allows the mixer to be transported easily and safely, and it has enough handles to allow several people to carry it at once.