The Behringer TD-3-RD is the red version of this much-loved bass line synthesiser, a classic reference for any synth connoisseur. Whether in prog rock, new wave, EDM or synth pop, a host of legendary acid sounds that will stand the test of time, have, and still are, being created on the TD-3-series – and its pure analog signal path! The sawtooth and square waveform oscillators form the basis of powerful and super-fat bass lines, as well as gritty leads. Added distortion, one among many effects included in the TD-3-RD, will dirty that sound even further. The TD-3-RD includes both MIDI and USB ports. Should you prefer a software rather than a hardware interface, the Synth Tool application provided is intuitive and practical – while, of course, machine-programming remains fully operable. The TD-3 series is available in an array of different colours. 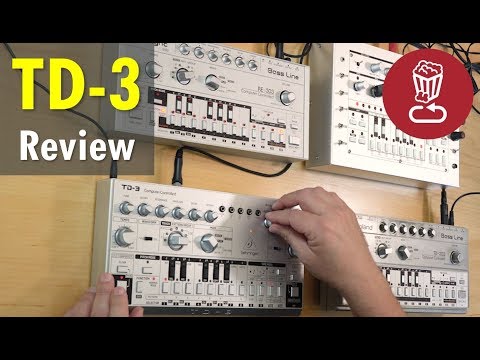 The TD-3 series patterns are organised into four groups, each of them divided in 2 sections, A and B. The keyboard acts as a shortcut to all the different patterns, each can then be individually selected and edited. In order to program each section, ‘write mode’ must be selected in the central control area, and then the pitch and time value of each key assigned. The ‘step’ button defines the number of steps in each pattern, which can go up to 16. Longer sequences can be created by playing patterns sequentially or chaining them in track mode which allows patterns to be played in any order. A total of 64 patterns can be stored in the TD-3-RD. A random pattern generator is also included, which can be a great help in simplifying and helping with the design of new patterns. To enable random generation the ’Start’, ‘Stop’ and ‘Clear’ keys must all be pressed simultaneously.

At 663 g, the Behringer TD-3-RD is easy to handle and of course fits more or less anywhere. Behringer's recreation of the original user interface allows the exact same workflow that spawned so many great bass lines and leads during the 80s. The distortion section can be added at will, in easily controlled increments. The ’ Tone Control’ function, which remains neutral in middle position, is useful for either ‘muffling’ or making bass lines more aggressive. The TD-3-RD can be clocked to any other synthesizer via the sync-in input. In addition, the CV-out (controlled voltage gate out) can be used to trigger external synthesizers.

The company, which was founded in Germany by Uli Behringer and which now produces their items in China, has been known for affordable and great value equipment since their very first product, the Studio Exciter F. An array of mixing consoles (such as the Eurodesk MX8000), signal processors - and later sound amplification and monitoring equipment – has made it possible for countless musicians to fit out their home studios, practice rooms or mobile PAs, within a budget limit that was previously unthinkable. The acquisition of other companies, among others Midas, Klark Teknik and TC Electronic, meant that new product groups were added - and also resulted in the technical know-how of these companies being incorporated into product development. The still young synthesizer division of Behringer continues the philosophy of the firm, which is to offer truly affordable classics with outstanding features.

The provided Synth Tool allows the user to immediately access any preconfigured TD-3-RD pattern via USB. From there, patterns can easily be imported from the machine into the computer, modified at will, and then sent back to the TD-3-RD. This is done via the ‘Recall’ function. Inside the editor, note values can be changed via drag-and-drop operations, as can be the total length of the pattern. The ‘Store’ function in the Synth Tool allows patterns to be easily stored back into the TD-3-RD. Accents can also be programmed, by right-clicking on the desired notes. The value of each accent can be adjusted via the corresponding slider on the TD-3-RD. The Synth Tool software includes further control options, such as MIDI routing, PolyChaining and calibration of the TD-3 RD. 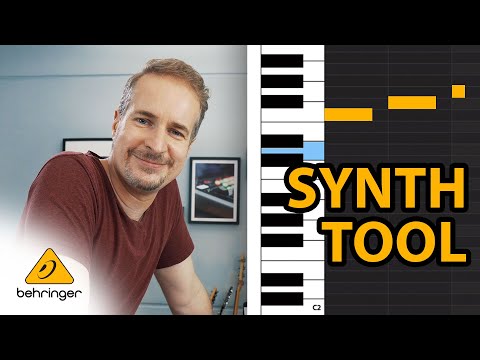 If you want/need more bass and/or acid in your studio then don't even think twice about buying this. DO IT! Also, at this price point, it becomes a cool and "fun" instrument for younger kids and also a talking point or whatever. Stick it through a reverb pedal into your hifi and just have it rumbling along. Tweak it every 3 hours or so. Instant TRON ambience for your house :p BUY!
Helpful · Not helpful · Report
Report rating…

Send report
handling features sound quality
That Acid Sound
rob lee music, 22.12.2019
The Behringer TD-3 sounds absolutely fabulous and the distortion FX are top notch. The synth feels great and the knobs are pretty solid. Your getting this pure acid machine for pennies here at Thomann which also I must say delivery was ultra fast to the UK.
Don't even think twice about buying a TD-3 just do it. There are soft synths out there that cost more but don't give you the satisfaction that this thing does.
Absolute bargain and great sound.
Thank you Thomann
Helpful · Not helpful · Report
Report rating…

Send report
handling features sound quality
Amazing TB-303 clone
&#12373;&#12371;&#12362;&#12435;&#12364;&amp, 29.12.2020
Was interested in trying out the TB-303 bassline for my electronic productions. Highly recommend going for this clone instead of buying expensive software plugin recreations. The TD-3 sounds just like the real OG TB-303, and at this price point this little box is one of the most fun synths you can get out there. Highly recommend!
Helpful · Not helpful · Report
Report rating…

Send report
handling features sound quality
to td-3 or not to td-3
pinch of salt, 02.01.2020
This little thing knows only one thing and it knows it well. It's totally fun and therapeutic to bang in a bass line and tweak the acid :-)

Comparisons with the TB abound, so won't go into that.

I'd get it for the price. In fact, get two.
Helpful · Not helpful · Report
Report rating…

Synthesizers
There are a wealth of synthesisers available today, ranging from hardware keyboards to virtual software instruments.
Interesting Accessories 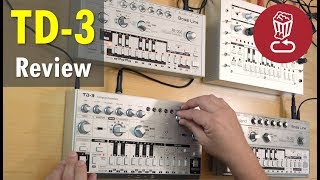 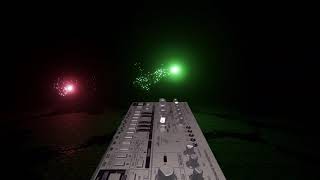 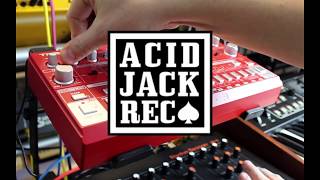 Show all
Synthesizers
There are a wealth of synthesisers available today, ranging from hardware keyboards to virtual software instruments.
test results:
Read review