28
Cordial CFD 1,5 DDA
£66
Steinberg Nuendo 11
£711
10
Universal Audio Apollo x8 Heritage Edition
£2,222
3
Appsys Multiverter MVR-64
£1,935
23
Antelope Orion Studio Synergy Core
£2,149
9
Antelope Zen Tour Synergy Core
£1,425
1
Heritage Audio HA 609A Elite
£1,355
92
Millenium MS 2014
£12.40
Antelope Amari
£2,080
51
Antelope Discrete 8 Synergy Core
£1,075
3
Fredenstein Bento 8 Pro Pure Analog
£329
2
Antelope Satori R4S Bundle
£1,499
5
MOTU 24 AI
£699
10
Antelope Edge Solo
£285
62
Antelope Discrete 4 Synergy Core
£777
6
Ferrofish A32 AD/DA Converter
£1,439
17
Focusrite Clarett OctoPre
£466
2
Antelope OCX HD
£1,148
37
RME Fireface UFX+
£1,585
2
Steinberg AXR4
£1,699
11
RME ADI-2 Pro FS R Black Edition
£1,250
11
Apogee Ensemble Thunderbolt
£1,790
17
Ferrofish Pulse16
£666
3
Presonus Quantum 4848
£1,079
6
MOTU 24 AO
£699
2
Tascam ML-16D
£1,069
4
Ferrofish A32 Dante
£2,159
17 Customer Ratings
4.9 /5
quality features handling sound
massirights, 29.11.2019
Antelope Orion 32 + Gen 3 is a multi-channel audio interface. It offers a multitude of channels both analogue and digital in various formats. That is, it covers most of the needs for both live and studio use.
I use this product mainly live, dealing with classical music recordings, which involve the simultaneous use of many microphones.
There are many pros to list, but also some flaws to be reported and improvements to suggest.
The sound is excellent, very detailed and beautifully placed spatially.
The conversion is very linear. The latency is reduced to practically zero, and delays are not appreciable.
Furthermore the interface has a really versatile control software, which allows a very diversified use.
It would be too long to explain in detail all the possibilities offered by the software, which are really many. The only drawback is the technical support for the use of the software itself. The tutorial is unclear, the manual practically non-existent, so much so that the software appears to be an inextricable tangle of little use. Instead it is really useful, well done, and effective. You can connect every point in the matrix with whatever else, send it to the DAW, and much more. It is possible to have multiple configurations, which can be recalled not only by software, but also from the physical interface panel. it can be used to connect different software together, so that the output of one of then becomes the input of another one.
It is a pity that both the inputs and outputs are not currently visible on the display, and indeed without the software the operation of switching between displaying the in and outs it is very cumbersome.
And it should be noted a very dangerous characteristic of the machine: the power button, only if touched for a very short time, turns the unit off. For live uses I recommend making a cover with a plastic bottle cap to avoid accidental bumping it. Too bad, however, that the same key gives access to an important menu if pressed for a long time. Frankly I would have preferred the operation to be opposite, that is, that the menu appeared with a simple pressure, and the switching off with a prolonged pressure; and I gave this suggestion to Antelope. We'll see if they know how to welcome him. To conclude: despite the indications of the House that require a Mac at least born in 2012 and with the Sierra system, it works very well also with the Mac of 2010 and OS El Capitain.
In short: it's really a very good investment.
Helpful · Not helpful · Report
Report rating…

Send report
quality features handling sound
Great converters
Fab73, 01.03.2021
I am really happy with this interface. Extensive connectivity, great sound and (once learned) great matrix which makes this hardware almost as flexible as a digital patchbay.

I use it with Mac OS (Catalina) and from time to time when I turn the computer on, I need to re-start it since the audio interface is not recognized by the system.
Helpful · Not helpful · Report
Report rating…

Send report
quality features handling sound
Crystal Conversion
Blueleaf Studio, 30.04.2019
I bought the Orion32 to improve my AD/DA conversion and it's done just that and some more. I'm really impressed with the conversion quality. The control panel software takes some fiddling with and I had problems getting a signal into the unit at first but Antelope support were absolutely fantastic and one factory reset later the problem was solved. The only thing that is a little disappointing is the price of the FPGA Fx. You get them free with the Orion Studio but not with the 32+ and boy do they cost to buy separately. That's not so bad though as I didn't buy it as an effects box and really that's just an added bonus.
Helpful · Not helpful · Report
Report rating… 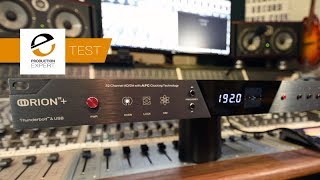 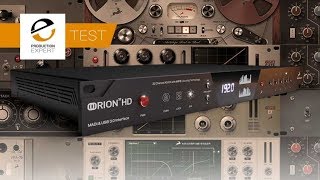 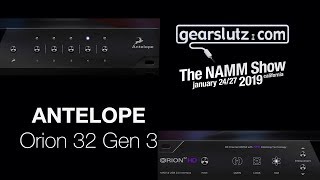 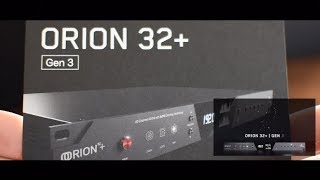 Show all
Audio Interfaces
There is a wide range of audio interfaces available, and in the end, choosing the right one comes down to your personal preference.
Show all
Recording E-Guitars
Our aim is to explain the basic process of recording the electric guitar!
Show all
Home Recording
Home Recording can be very complicated. We're here to offer some advice!
Show all
Computer Based Studios
This article will look at how to integrate a computer into different studio environments, and will highlight the issues of functionality and connectivity.
test results:
Read review