92
ABM Rollerbridge 2400c-RO C
£93
9535
GHS Fast Fret
£5.90
11726
Millenium GS-2001 E
£6.60
2640
Daddario EXL110
£5.30
3
Lollar P-90 Dogear Short NE BK
£101
ABM 2500s TOM Style Bridge
£85
2
Duesenberg 3-Point Rad. TOM-Style Bridge
£50
2
Schaller Signum Bridge C
£116
24
Babicz FCH Tune O Matic Bridge C
£145
4
TonePros LPM04 N
£94
Schaller Signum Bridge G
£163
4
Lollar P-90 Dogear Tall BR BK
£101
5
Epiphone Les Paul Junior VSB
£322
6
Schaller Signum Bridge N
£116
43 Customer Ratings
4.6 /5
quality
High quality roller bridge with a great sound
Andrew822, 05.11.2020
I needed a roller bridge to add to my hollobody with Bigsby. I went for the ABM it looked the best quality compared to the other ones available, plus it fits between 73 and 75mm post distance and has the grub screws to tighten your posts. It is made out of bell brass so promised to sound great.
I was not disappointed at all a very A very well made piece of kit as in no rattling from each saddle and all rollers roll freely under the fingers. Also provides you with extra grub screw plus the allen key and also some spare little tiny springs used to retain each saddle in place. You also get the studs and post screws for the Les Paul type fittings. Also get a couple of thumb wheels for a floating bridge - they were too big for mine but still a nice touch.
Be aware that on this model the screws are near to your bridge pick up although the intonation was already set for my case. There are 2 widths of roller wheels one is for wound strings and other 3 for plain steel strings. I did not have any trouble installing it and on my archtop guitar it works like a charm I am happy with it.
It is expensive compared the similar looking Chinese ones we see around the web but don't be fooled these only look similar this is really a high quality German made product.
Originally I was hoping it would cure the problem found on archtops with tremolos that the E string can pop out of its slot if hit hard enough although it did not completely cure this it did improve it a good bit, I suppose I'll just have to not play as hard.
The bell brass seems to make all the difference as acoustically and plugged in it seems to sound better than the tune-o-matic that it replaced or is that because I paid a lot for it and I want to justify the extra cost, still happy I did get this one it looks great as well as all of the above.
Helpful · Not helpful · Report
Report rating…

Send report
quality
Rhinebeck, 15.09.2019
Used the rollerbridge on a Gretsch 2622 budget project. If you're doing the same you have to remove the current tune-o-matic pins and then the ABM rollerbridge will drop right in. The fit will be loose until you fasten the lateral adjusters.
Helpful · Not helpful · Report
Report rating…

Send report
quality
The Ulitmate Roller Bridge
12.02.2016
I have a Gibson ES 135 to which I have fitted a Bigsby unit. Since fitting the Bigsby, I have had problems with the guitar's original bridge - a Gibson ABR1 - namely with tuning problems and string breakages.
I'm not a fan of the ABR1 anyway; the saddles have sharp edges which frequently cut my hands and cause strings to break, and they are rattly and made of cheap materials. Lots of people have improved the design over the years and yet they still find their way on to expensive Gibson guitars, strangely.
I had been meaning to replace my bridge ever since fitting the Bigsby, but when I broke two strings in one gig the other night, I decided the time had come.
I came across the ABM on Thomann after comparing a few designs. I wasn't previously aware of it, but it looked great and, more importantly, had all the right dimensions (radius, string spacing, intonation adjustment), so I ordered one.
It's not cheap compared to other roller bridges, but then it's machined from bell brass, not die cast from zinc, like most others. When it arrived, I was delighted with the quality - even better than it appeared in the photos. This bridge is BEAUTIFULLY made. It fitted my guitar perfectly (amazingly, it needed practically no adjustment for perfect intonation!) and feels really comfortable under my strumming hand, due to the complete lack of sharp edges.
I'm not going to comment on whether brass is sonically superior to cast zinc, as I'm not qualified to do so, other than to say it sounds great to me. No dead spots; a full, even response across the strings and neither noticeably brighter nor darker than before.
Most importantly, my tuning is now incredibly stable (no creaks or pings when using the Bigsby, either) and I have yet to break a single string.
Thoroughly recommended and worth every penny.
Helpful · Not helpful · Report
Report rating… 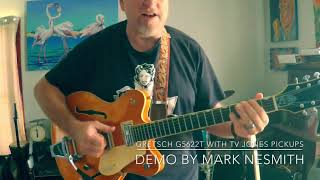