Expressivité Son Qualité de fabrication Caractéristiques
Nice tone, good tuning and fairly easy to get a useful range
Andy HornBlower, 01.11.2016
I'm a very poor flute player, but I got a couple of octaves out of this almost immediately, and the tone is nice, especially in the second octave.

The raised tone holes make it easier to get a good seal on the holes, so you could use either piper's grip, or your fingertips. Fingertips feels more comfortable on this one, to me.

The extra depth of the tone holes (like a chimney) should also mean the tuning of notes is more stable than just having holes drilled into a pipe - clarinet tone holes work the same way, for that reason.

For other non-Germans who are wondering about these (and the lack of explanation of them that's given on this site), by 'B' they mean Bb. B natural would be written 'h', in German music. And by Bb, they mean the transposition, like a Bb clarinet or a tenor/soprano sax, not the lowest note it can play (like on a whistle or an Irish flute or a fife).

They are quite expensive, but they're well made and a good design. They tune pretty well (to A=440Hz) over the two and a bit octaves I can manage so far, due to the Sandner spike thing in the headjoint end.

Compared to a Generation whistle, they're very expensive, but that's not a fair comparison. There's more engineering in these than in other simple flutes (e.g. Dixon), and they're arguably easier to play - it took me a while to get much more than an octave out of my Dixon Bb and G flutes, and those have quite a noticeable tuning discrepancy between octaves.

They come in a strong plastic tube, with a cap that's held in place by elastic so you don't lose it when you take it off.
Utile · Inutile · Signaler l'évaluation
Signaler une évaluation... 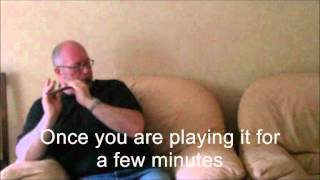