Generally, we first of all distinguish according to the different construction types.

In doing so, the tuba is an exception to other brass wind instruments, none of which come in such a wide variety of fundamentally different construction types. They have developed thanks partly to historical conditions, partly to their intended use.

Bass and contrabass tuba - the upright“.

The most common construction type in Europe is probably the bass or contrabass tuba, an upright and straight type. It may feature various modifications, such as size, pitch, valve type and arrangement, but more about that later.

Looking at the historical development of the tuba described elsewhere, we are already aware of some of the tuba's uses. Military music, and marching music in particularly, plays a prominent part here. These types of music required instruments for playing in special conditions, for example on horseback.

The helicon, in use mainly in Eastern and Central Europe, was developed to meet this requirement. This variation of the tuba features an altered body shape, devised to deal with the different ergonomic needs. It wasn't built upright, but round, around the player's body. The bell points straight forward, which has the advantage of directing the sounds in marching and parades straight at the audience. A further advantage of this construction type is the improved weight distribution when marching. The instrument rests directly on the player's shoulder, which renders other carrying aids such as shoulder straps unnecessary. 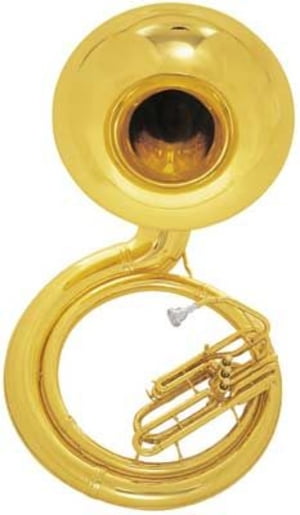 Over the last years, the marching tuba has gained popularity among the marching bands of US American high schools in particular. This instrument is mostly a standard upright tuba, but with the lead pipe extended and angled in a way that allows the instrument to be carried on the shoulder, and the bell to be pointed forwards. This instrument was further altered in 1908 by the American composer and conductor John Philipp Sousa for American show and military bands. Unlike the helicon, the eponymous sousaphone usually consists of two parts. Its construction involves a bell that extends over the head of the player and points forward to make sure its sound carries over the heads of the band and remains distinct. It's worth mentioning at this point that besides the usual metal, synthetic fibreglass models are also available. They are significantly lighter.

All the instruments described so far exist for their own good reasons, but it's safe to call the helicon and the marching tuba outliers. The sousaphone, however, has become a well-established instrument, especially in marching and show bands as well as the dixieland scene.

The differences in construction also lead to difference in sound, of course, but this is not meant to be an evaluative statement. When you buy an instrument, you should of course keep in mind the context in which you will be plying it. Instruments with foward-pointing bells, such as the helicon or sousaphone, are probably too assertive for the fully rounded sound of a symphonic wind orchestra. For a brass band or a wind orchestra, the bass or contrabass tuba are most likely the instrument of choice.

One Construction Type - Where's the Bell?

Even regarding our tradition construction type, significant differences occur within this type. The bell points straight upwards, but it may be attached on player's left or right side of the instrument.

Large or Small - Good Tubas All!