Fantastic - An Essential Part Of My Setup
Richard Hamilton, 30.06.2017
I bought Blinds as part of a small starter Eurorack setup to expand on the functionality of a Microbrute. I wanted a module to explore CV manipulation.

The module is clearly laid out and easy to use; the only challenge I've had was getting my head around the bi-polar nature of it. Initially, I used it as 4 VCA's and a mixer, but as I learned more about manipulating waveforms, it's become essential for controlling envelopes and LFO's. I've also played with its ability to ring modulate two audio sources, though, I haven't explored this much.

I'm aware that some people find dialling in the pots to 0 and removing bleed a challenge when using it as a VCA. If you prefer not to do this, then Mutable's Veils may be a better choice; which Thomann also sell. In my small setup, and for the type of music I'm currently making, Blinds is perfect.

Blinds offers versatility that has enabled me to explore what I want out of Eurorack and make choices about subsequent module purchases. It's been described as a subtle work of art, and I couldn't agree more.
Utile · Inutile · Signaler l'évaluation
Signaler une évaluation...

Utilisation Caractéristiques Qualité de fabrication
Great Quad Polarizer
Feelsy, 05.03.2019
Blinds is a really solid quad polarizer. The build quality is great and next to simple applications such as using it as an attenuverter/offset-generator, it sound very clean with audio and handles audio rate modulation very well. The cascading mixer and visual LED feedback are great additional features. The only (minor) downside is it can be difficult to dial the main pots to the zero position to use Blinds as a VCA. Overall, its a great module and I can recommend it highly!
Utile · Inutile · Signaler l'évaluation
Signaler une évaluation...

Random Gate and CV Generator Module 3 Gate outputs, Either clocked by the 3 outputs of the random number generator or by a common external clock, Internal clock with adjustable rate (with V / O CV... 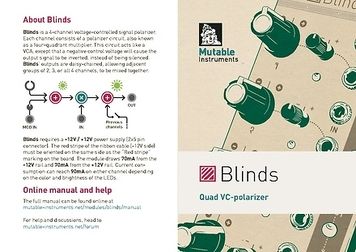