Stabilité Utilisation Qualité de fabrication
As metal boxes go, this one is in tune with your soul and obedient
adbiac, 03.02.2021
The box has six sides although two of them are made of air. Rack mounts adorn the front two sides of the box and descend from the top to the bottom, or bottom to top depending on which way up you have it. The box has a charismatic sturdiness which also suggests a certain level of agility. In use it performs well and holds my racked boxes with an assured grip similar to that of a horse rider clasping a their reins as the destrier moves from a trot to a canter. I have given 5/5 for handling but was note sure how to interpret this. Do they mean handling as in how a car's steering wheel and suspension react to the driver's input? If it's then then I'd probably give it 3/5, but that's not a problem as it is not designed to be driven anywhere.
Utile · Inutile · Signaler l'évaluation
Signaler une évaluation...

Stabilité Utilisation Qualité de fabrication
Great Studio rack
nickstomp, 06.10.2021
Great studio rack. the only downside is:
1) would be great if thomann/millennium start including the bolt and screws to fix the rack. when I made the order I forgot to include them and it was really difficult to find those
2) there are some rough edges on the inside and the corners are sharp. This expecially when its full of gears its an issue
Utile · Inutile · Signaler l'évaluation
Signaler une évaluation... 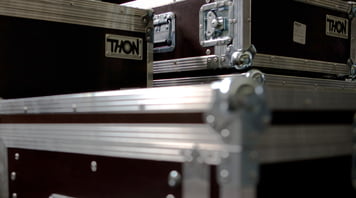