Son Qualité de fabrication
Nearest You'll Get to a Strat sound from a Tele
ChrisDowning, 11.11.2020
The Royal T is built to replicate how the Strat neck pickup get its tone - so it has taller pole pieces - alnico 5 - to allow for more windings of the thicker 42-gauge coil wire used in Strat pickups - the taller magnet allows for more windings whilst still staying inside the narrow, short tele style pickup. Also doesn't have the pickup completely encased in a brass, chrome coated cover - leaving the tops of the pole pieces open to the strings. This pick up will take your Telecaster even closer than the Twisted Tele Fender pickups into Stratocaster territory. I was using a Nocaster in the neck and that just didn't cut it in a band - but the Royal T is great and come close to that classic sound of the Stratocaster neck pickup whilst still retaining some Telecaster character. The Alnico 5s and 42 gauge wire gives it plenty of volume - so if you have a truly low output bridge pickup this one might not quite match up volume wise - its medium output in my opinion - just like your average Strat neck - so should suit 85% of Telecasters. You could go the whole hog and get a bridge pup from Lollar - see their site for matching recommendations. No cheap - but you Telecaster will be a tone monster!!
Utile · Inutile · Signaler l'évaluation
Signaler une évaluation...

I have never been a big fan of Telecaster neck pickups due to the eddy currents imparted by the conductive metal cover, which is traditionally made out of brass. The cover sucks all of the higher end out of the tone, making the pickup sound muted and dark.

The Alnico 5 rod magnets are a logical choice, as Alnico 5, aside from being a traditional magnet type for old strat pickups, has a lower inductance than Alnico 2 or 3 due to having less permeability. A lower inductance means a higher resonant peak, resulting a brighter-sounding pickup.

Although a Tele neck pickup can never 100% match the tone of a Strat neck pickup (all else being equal) due to the physically smaller bobbin, the Royal T is about as close as it gets. And deliver it does.
Utile · Inutile · Signaler l'évaluation
Signaler une évaluation... 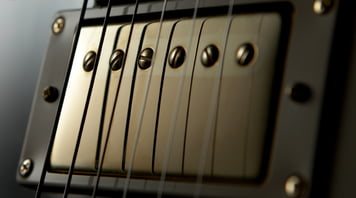 Tout afficher
Pickups
There is nothing mysterious about the basic principles of the electric guitar pickup.