Utilisation Caractéristiques Son Qualité de fabrication
Needs Further Development
Phil the Greek, 17.03.2021
First let me say I am very happy with Thomann and their Harley Benton line. This is an honest review designed to explain who this product is for, and who it is not.

I'm long time live performer, who also enjoys busking and have bought numerous street amps, including from VOX, Fender, and my (now renewed) favourite the Street CUBE from Roland. While the quality of construction materials and overall sound is very impressive on this new device, I was seriously disappointed on a few counts. Some were absolutely mind blowing and I am still scratching my head….

BUILD: The wood casing and carrying bag are all of exceptional quality. It looks as awesome or better than the photos, as I was expecting it to be made of some type of fake plastic wood. It looks VERY high end and is an impressive piece of construction, especially at this price.

SOUND: The quality is excellent and the amount of control over tone is great. Having three channels to mix was a big wow I wish other amps in this class had. Reverb and Delay were gorgeous.

NO INPUT OR OUTPUT!!
Despite the product page clearly listing “Amp out and input (line)” as a feature, the two jacks are NOT stereo audio in and out, but according to the manual are only for connection to a "similar device" which can then "be controlled by the second device". I could not for example, connect an MP3 player to IN, or get a signal to another device with OUT. I have never seen such a closed system that cannot be connected to other devices... only a second identical one. Would love to see a demo video of this unique process in action, but I need what has been standard on EVERY other street amp I've bought.

TOO NICE LOOKING TO LEAVE THE HOUSE
Sadly, the fancy construction makes it more of a boutique device which would look very nice at home, especially great for bedroom players - but NOT street use . Even the instruction manual declares “This device has been designed for indoor use only”. Not something I want to read on my street gear and which makes me wonder why it is called a “Street Box” in the first place.

I almost said it was more designed for women (the stitched white Harley Benton script logo almost had me reaching for a magic marker so it wouldn't look like a chic make-up bag), but all the female performers I know also want tough equipment that can handle being moved from car boot to stage to street. Music gear for anyone who plays outside the bedroom needs bangable corners, and not be something you would regret scratching.

BATTERY INDICATOR IS NO HELP
The product has only three LEDs as battery indicators (which I knew at purchase, and was concerned about) but only two ever actually indicate. Mine arrived showing the two bottom lights on (70%), but even after 8 hours charging at night (not just the 3 hours supposedly required for FULL charge from empty) not only did the lights not stop pulsing a charging indication (most chargers stop blinking when charge is complete - so here you will never be sure if it is fully charged) but went straight back to only two lights when the charge plug was removed.

Remember this is a LI system that cannot be swapped for charged batteries if you run out mid performance, so it is ESSENTIAL to have a good idea of how much charge you have remaining. Two lights will not be much help.

NOT REALLY 60 watts of SOUND POWER
I have 20 watt amps that would blow this amp away, and my Roland Street CUBE is only rated at 5 watts but can stand next to it in terms of volume.

CONLUSION:
This product is ideal for home or hotel room use. The bluetooth player would make it a great device for a traveling player to have in his/her room to either jam along or just use to play music from your smartphone. It is great value for money in terms of quality of both sound and construction. But I give it only 3 stars because it is NOT what it says it is, a Street Box.

THOMANN ADVICE: Please make a product like this that is more rugged, has a better battery indication system, and allows for input and output to any other devices, and you will have a real winner, that could be used for both indoor and outdoor live playing.
Utile · Inutile · Signaler l'évaluation
Signaler une évaluation...

Utilisation Caractéristiques Son Qualité de fabrication
A great battery powered amplifier.
Vidoo, 13.03.2020
Honestly, I did not expect it to be that good. It has very nice clean sound and it is loud for its small size. Problably the best amp with 3 channels.
Also a very good prize for a battery amplifier with so many options.
Utile · Inutile · Signaler l'évaluation
Signaler une évaluation...

Guitar Amps
The following pages give an overview of the various types of guitar amp available.
Téléchargements gratuits 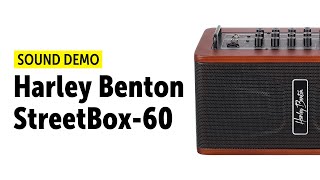