Utilisation Caractéristiques Son Qualité de fabrication
Yes and No
Hanck, 09.08.2019
Comparison Golden Age mic preamps: Premier PRE-73 and Project PRE-73 MKIII for e-piano and bass. Conclusion: the price differences translate to sound (and noise) differences which made me decide in favor of the premier series.
I ordered a Golden Age Project PRE-73 MKIII. I was not satisfied because of the noise that already appeared with gain and output volume both just over half way (I practice in an extremely noise free studio). For comparison I ordered a Golden Age Premier PRE-73. The noise level was lower, worked for me, though certainly not noise-free at higher volumes/gain.
I tried it on bass, the sound was a bit smoother than the MKIII. It was a rich, heavy and lively sound, only the highs lacked a bit sustain.
On e-piano the sound of the Premier was much better than the MKIII, I can only describe it as: there was restfulness in it. Also less deformation than with the MKIII. Now with bass it is just a matter of taste, but with piano the undistorted sound is important. So you don't get a messy sound when using a lot of polyphonies. Both preamps gave the piano-sound much more power, body, warmth, harmonics and (Premier only) detail and liveliness.
I bought the GAP Premier for the piano. For my Safran semi-acoustic bass I bought a Marleaux Tonwerk instead. A little less lively sound, but no problems with noise at high levels and it sounds sweet in combination with the piano (the eq helps to make the bass stand out whilst playing). Thomann was very helpful with advice and service. For more comparison see review of the Premier PREQ-73.
Utile · Inutile · Signaler l'évaluation
Signaler une évaluation...

Mic Preamps
Microphone preamps, are analogue devices that will remain important even as most other equipment is superseded by digital alternatives.
Téléchargement gratuit 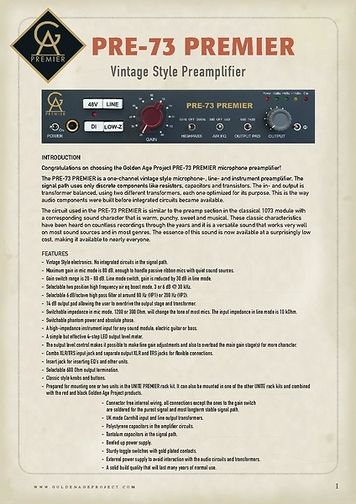