This filter definitely imparts its own character onto whatever sound source you put through it. It is a transistor ladder design in the style of the minimoog, and having owned and used a minimoog for several years, in my view it captures the sound of that synth's filter, but it is also a great sounding filter in its own right. The A-108 offers 4 outputs that correspond to four filter 'slopes' from 6db, 12db, 24db and finally 48db. My favourite is the 24db output, but they all sound great. As with several of Doepfer's filters, the input stage can be overdriven, which results in a harmonically rich sound, a bit like running a synth through a valve guitar amp.

The filter can be forced into self oscillation if the emphasis ( resonance) is turned up high, and the filter can produce the full range of fat bass synth sounds up to squelchy acid-house stuff.

I really cannot fault this filter, especially at the price. I have other filters such as the multi-mode filter in my Doepfer Dark Energy mk2, and a Doepfer A-101-2 Vactrol low pass / gate module. These all sound good and very different from each other.

My only suggestion is that the A-108 would look great with black control knobs, like the ones fitted to the Dark Energy synths. That would be really cool.
Utile · Inutile · Signaler l'évaluation
Signaler une évaluation...

Fat and Fabulous
Sean D., 24.05.2013
Lovely bread and butter module. Probably the most Moog-like filter Doepfer makes, though it doesn't sound exactly like the classic Moog ladder. By the time I finished my Euro modular I had only kept 3 filters, and this was one of them.
Utile · Inutile · Signaler l'évaluation
Signaler une évaluation...

Artificial Birdsong
colon, 05.06.2017
I have had the module now for about a week and a half and i am having a great time with it. I used it both as an oscillator and a VCF.

Setting up volt/oct the VCF in self oscillation and modulating it with a Make Noise Maths i was able to create a convincing birdsong, which i have posted on my youtube channel here, >
I also used it in the creation of a Karplus Strong patch where it controlled the white noise that fed a delay line used.
Utile · Inutile · Signaler l'évaluation
Signaler une évaluation...

48dB low pass filter
Jonathan64, 13.07.2013
Few modular synth manufacturers make a 48 dB (8 pole) filter. It is capable of very steep cutoffs as you might expect, but there are also a number of less steep filter outputs. All in all a very useful and unusual module.
Utile · Inutile · Signaler l'évaluation
Signaler une évaluation... 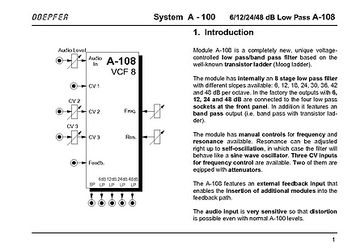 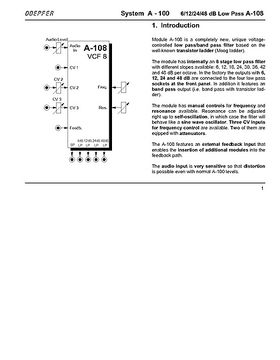