Utilisation Caractéristiques Qualité de fabrication
Works best for modulation
Earl Langoustine, 20.01.2021
The Behringer 921 VC Oscillator is an accurate clone of the original Moog unit. Having used this module extensively, we've realized that it makes the most sense if used with the other Moog components. If you plug it into a typical Eurorack system, several things will probably confuse you at first.

- The switchable output comes with a switchable wave shape and a large volume knob, but also with an inverted output. This suggests that you are supposed to use it as an LFO, and use the inverted output to get saw and ramp. It will track with semitones, but it works a lot better in wide mode, where you can go to very slow up into audio rate, and can be used as modulation for very cosmic tones.

- The four waveform outputs along the bottom are much quieter than typical Eurorack level, but can be mixed together with the CP4 mixer (which also saturates). On the similar Moog 901 VCO, these outputs also had individual attenuation.

- Like the original Moog, the oscillator is tuned to F. The user should be ready to calibrate the tuning via trim pots on the back (see instructions in the manual, which is also online if it's not in the box)

- The oscillator tracks over a 5 octave range. Some of the waveforms like the sinus and triangle will lose their character at audio rate if you go too low. Also, the oscillator stops tracking pitch at 0 V, i.e. there is a minimum pitch when using this with CV.

To better understand how the Moog modular is supposed to work, look up Daniel Fisher's Moog Model 10 videos. Also helpful is the AM Synths webpage about this module, which goes into much greater detail about this module's technical characteristics, voltages, et cetera!
Utile · Inutile · Signaler l'évaluation
Signaler une évaluation...

Utilisation Caractéristiques Qualité de fabrication
Useless output levels (1/10th of normal eurorack levels)
Andvarc, 04.11.2020
I bought this for use in my modular synth. On the surface it is a great oscillator for a bargain price. However, there is a caveat: The main waveform output levels are next to useless.

Raeson: The 4 main oscillators output levels are only -4dBu (0.48V rms). That is roughly equal to consumer level audio output (only 1/10th of normal eurorack levels). The aux output has a variable level and can output up to +/- 5V or rougly +16 dBu which is fine.

The low output level for the main waveforms means that you need to amplify these outputs by 20db to use them in your eurorack where 5V is the standard.
In practice what happens is that when using this module together with other oscillators and modules that output +/- 5V - the signal from the 921 is completely drowned out (unless they are amplified first - which is downright silly). Hence the only part of the oscillator you can really use is the aux output.

Ultimately I found this unacceptable and a waste of precious rack space and have returned the module. I am very sorry about that, because I loved the concept. Behringer: please fix this stupid design flaw.
Utile · Inutile · Signaler l'évaluation
Signaler une évaluation...

Utilisation Caractéristiques Qualité de fabrication
My first piece of the legend
Marek Szulen, 20.03.2021
This was my first, ever, eurorack module. I've connected it to Behringer Crave as an additional VCO.
I was surprised by the quality of the module (the knobs and the whole unit). The sound is really nice and it's a great addition to Crave. The only thing I didn't know before is that the main outputs are lower level and need mixer/amplifier. That's not an issue as I can (and will) add the mixer. I'm thinking about another module and (of course) it will be Behringer and via Thomann (great service and express delivery). 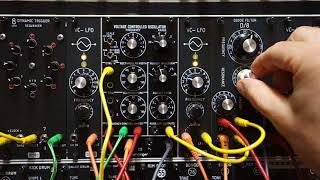