Utilisation Caractéristiques Son Qualité de fabrication
Very good and stable with Airport express
Eugene M., 13.02.2017
This review is intended to let you know my findings on the various satgebox type mixers I have used as you are probably looking at several options at the moment so should be informative. I use several including the QU-SB. Hope you find it useful:

I had the Behringer XR18 and XR12. Good sounding unit but the apps for Android and iOS are terrible and Behringer have made NO attempt to improve them.

I looked at the QSC Touchmix but it has no remote pres. OK if you doing sound for yourself but not so much if you are doing sound for several acts where being able to recall changes saves bit of hassle during a muli-band gig.

The best app is the Master Fader by Mackie, I do not like the Touchmix app, Allen & Heath have a nice app. It is well laid out and functions well but Master Fader is by far the nicest to use.

I use an Apple Airport Express with a iPAD 4. Never had an issue. Lovely sounding mixer provided everything you plug into it is setup and eq'd correctly.

The thing to remember with any of these is that in the event of a wifi fail the mix will go on with no drop outs or fails , just you will not be able to make changes to the mix until you reboot the router etc. BUT if you program the footswitch on the QU to mute fx for 'between songs' announcing you are good to go in that regard.

One good thing about the Behringer XR series is it will allow you to control it with a hardwired PC/MAC, phone and midi hardware all at the same time (you will have to understand and know how to program midi cc's etc) giving you 3 simultaneous control options.

QU-SB will allow you to record BOTH to Qu-Drive AND MAC at the same time giving you a backup, I do not think the others allow for this even the DL32R. A big thing for my choice to purchase.

With any of them, run your router at 5 GHz, be sure your tablet is spec'd for 5 Ghz wifi pickup.

The QU-SB has no HiZ inputs you will need DI boxes, the behringer has 2 from memory.

I have used the QU-Sb for work doing sound for drama groups, choirs and bands and it never let me down. The Behringer internal wifi - just don't use it, the XR series sounds nice though.

So, for the money and the sound quality, good app, space saving on a small stage etc the QU-SB is the pick of them for me. If I could make my dream system it would be the functionality of the SB with the Mackie App and the ability to run hardwired to a MAC giving additional control.

Had Mackie priced the controller for the DL32R cheaper I would probably have gone for it (32 ins), then again it has cooling fans (not ideal if used as i/o with your DAW) and one less fx engine and will not allow recording to drive and PC at same time.

If you do a 'one man show' check out the Soundcraft Ui12 as it has amp sims which are not bad and means you have one less thing to carry to gig etc. It also has a music player you can run backing tracks from for less than ?300!
Utile · Inutile · Signaler l'évaluation
Signaler une évaluation...

Utilisation Caractéristiques Son Qualité de fabrication
For top-quality, super-compact sound
Oncle Sim, 10.06.2021
I use this rack mixer as a digital stagebox for my SQ5, but not only. Having a fully functionnal mixer enables the use of the 4 FX engines to complement the 8 in the SQ5, plus ensures me that if I ever buy a DX168 (more suitable for the SQ5 but more expensive), I will be able to use it anyway for little live sound and recording gigs.
I love how I could make it all work very quickly by just watching the videos available on the A&H youtube chanel. I have to mention that I was already familiar with the A&H interfaces and framework so it may interfere with my opinion.
About the harware quality, it's quite sad that the rack ears are not included in the box. That being said, the finish of the mixer is perfect and its structure is rock solid. The fact that nothing stands out from the main body (not even the headphones level control) is reassuring. I fit it in a Flyht Pro Case 5 with all the accessories needed. Just before buying this mixer, I got a second-hand iPad 2 and the app runs perfectly smoothly. Note that it is only possible because A&H will not update the software anymore (does not need it) and that the app is compatible with previous iOS versions.
In the end, 100% satisfied of the product because everything was explained clearly from the beginning.
One word about the sound: it's A&H, don't worry, it sounds.
Utile · Inutile · Signaler l'évaluation
Signaler une évaluation...

Utilisation Caractéristiques Son Qualité de fabrication
A nice bit of kit! :)
01.11.2016
After much deliberation, I bought this digital mixer for our 5-piece rock band primarily for live performance although it also lends itself to studio recording. Other contenders included the Mackie DL32R and Presonus RM32AI. All of these products would do the job well but in the end it came down to sorting out the features we needed from the ?nice to haves? and in that respect the QU-SB came out on top for:

? Physical size - fits in a shallow 4U flight case, with plenty of room for a small wireless router.

? App compatibility ? band members can use Android or iOS smartphones to control their mix.

? Footswitch control ? useful for mic and effects muting in a live environment.

The other products support more than 16 local inputs and even Dante via optional expansion cards but for us neither of these things are necessary in a pub gig environment. And should the situation ever require additional I/O, this can always be accommodated via one of the optional A&H audio expansion racks (eg AB168).

I?m no sound engineer but so far I?ve been able to find my way reasonably successfully through the menus and settings. If there?s one criticism I have though it?s that the reference manual is written to cover the entire QU product range and it can be difficult to identify menus and settings that relate specifically to the QU-SB. In other words, whilst the QU-SB utilises the same core processing as the flagship QU-32, the lack of integral display, physical faders and buttons inevitably means that operation will be similar but not identical. For a novice sound guy that can be confusing and I would suggest that A&H produce a dedicated manual for this product.

To summarise, I?m very pleased with my purchase. It does everything the band currently require of it, at a reasonable price and I?m hopeful that Allen & Heath?s reputation for quality and reliability will ensure years of trouble-free performance.
Utile · Inutile · Signaler l'évaluation
Signaler une évaluation... 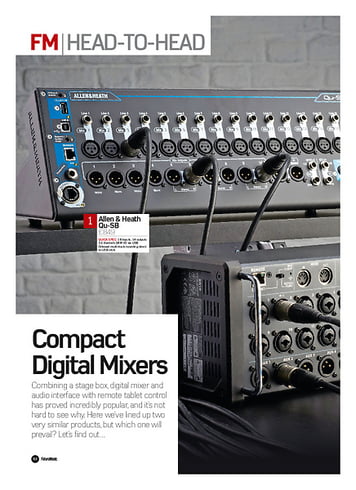 Mixers
In this guide well concentrate on the functionality of hardware mixers. They are an essential part of any live sound systems and studio setups.
Téléchargements gratuits 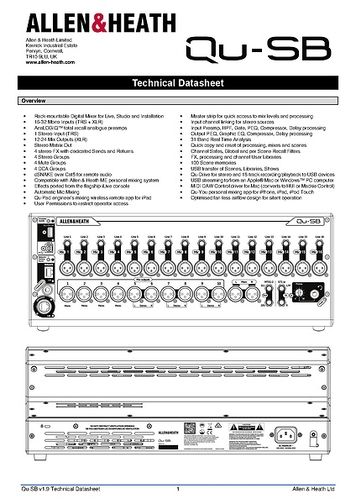 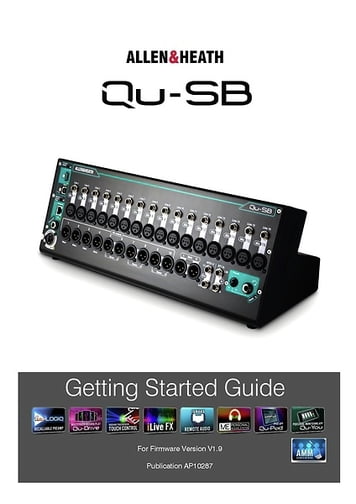