Käyttö Ominaisuudet Ääni Työnjälki
Fun and creative little chiptune machine!
01.08.2016
I purchased the PO-20 immediately after buying the PO-12 Rhythm, and while I have not tried all (most) of the Pocket Operators, I felt like those two were the first that I should own.
The PO-20 Arcade is a treasure trove of 80's nerd nostalgia along with a rich combination of rhythm, bass-line, lead, chord, and drone possibilities that make this the type of device you can make some pretty interesting loops with just a little experimentation.
As I've noticed on my other device, these Pocket Operators are extremely fragile (and, hence, not really "pocket"-friendly - please protect them!), but for only EUR 60 or so they pack amazing functionality and endless fun into a very affordable package.
The PO-20 Arcade really stands out in this line-up due to the variety of what it does. At first glance, it would be easy to assume it's a niche product for chiptune or video game-style bleeps and bloops. While it definitely has such an emphasis to its sounds, it also provides a surprising level of musical depth. There are 16 "sounds" available, but while about half of them include chiptune synth hits (bass, bass drum, tom, blip, noise, etc.), the other half includes 3 different arpeggios, a vibrato tone, and an echo/reverberating tone.
Moreover, rather than traditional effects (such as distortion and filters), the 16 effects include things like fills, retriggers, glitches, and universal arpeggios that rhythmically and musically modify your pattern on the fly. It's really quite difficult to explain how this works in practice, other than to say that you can take a pretty simple arcade pattern and morph it into something complex and beautiful just by adding a few effects.
My favourite features are the chords and drones. Using chords numbered 1-16 (each number corresponds to a preset chord, like Dm, Em, Esus, E, F, G, C/G, etc.), you can program a chord progression up to 128 bars in length. It's a bit of mystery to me what this actually does, except that if you program a chord sequence over a pattern with various sounds, it will tweak that pattern to match the chord structure. Even cooler, if you hold the chord button and twist the "A" (left) knob, it will introduce a sustained "drone" chord matching the chord progression you programmed. This can be further tweaked to range from static chords, to swells, and glitch-style stutters. All of this is BPM synced to the tempo you set for the song, so you can create loops and even longer progressions and songs that sound like finished products.
The thing I like about the PO-20 Arcade is that it introduces just the right degree of "hand holding" to allow someone with virtually no understanding of music theory to create complex arpeggios and progressions that otherwise would have taken a lot of knowledge and time to generate from scratch. But it does this without going too far down the path of being a music toy, or completely taking the control away from the user as to the content being generated.

All in all, if you're not a fan of chiptune or video game sounds in music, then the PO-20 might just not be for you. Personally, I find it to be one of the better implementations from the entire Pocket Operator line-up. You'd be forgiven for assuming it's a plastic noise effects toy, but with a little work to learn how it works (which I'm still doing), it proves to be so much more.
Auttava · Ei ole auttava · Raportoi ongelmasta
Raportoi ongelmasta...

Käyttö Ominaisuudet Ääni Työnjälki
Great for enthusiasts
Cici Mitri, 21.05.2021
More than you would expect from such a tiny device and more intuitive than it looks. However, it has some flaws, you can not use any filter available in any situation because it is very likely to drop unwanted frequencies.
Auttava · Ei ole auttava · Raportoi ongelmasta
Raportoi ongelmasta...

Käyttö Ominaisuudet Ääni Työnjälki
love it hate it
Ranzig, 20.04.2020
It's a small funny package, the sound is good. The features are simple, and the controls can be hard because of the tiny knobs. On the other hand it is really funny to use and make chip-tune like things. If you like the old arcade sound, and understand it's not a full fledged synth that you can incorprate in your workflow this might be for you.
Auttava · Ei ole auttava · Raportoi ongelmasta
Raportoi ongelmasta... 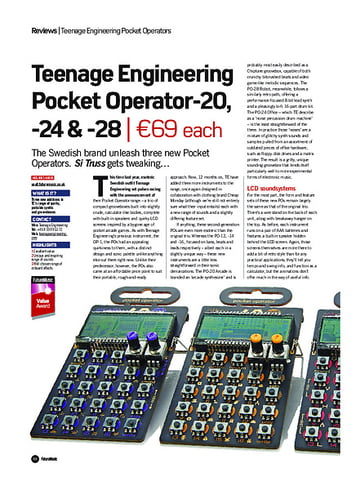 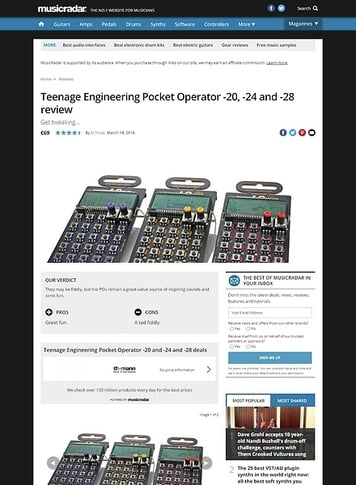