Työnjälki Vakaus
So far so good
Steve J. D., 10.01.2021
Let's start by saying that I've bought this mostly because it caught my eye (and the overwhelmingly positive reviews).

Once I opened the box, the first thing I noticed is how good the materials felt in the hand. I'm not an expert, but this thing feels different from other cheaper stands I had seen in stores.
It is fairly easy to assemble, although I haven't found any instruction booklet in the box. You don't really need it, but if you're as dumb as I am, you may risk messing up something.
Moreover, it's incredibly convenient to use. My bass is fairly heavy, and it stays firlmly locked on until I want to pick it up.

Now about the cons.
When it's not holding anything, the upper part of the arm wobbles a bit, which is something you wouldn't expect from a product of this price range. It gets very stable when you put your instrument on, but I think it's still something that needs to be mentioned.
Also, the locking mechanism is very smooth, but it's made of fairly light plastic. I'm not saying it's cheap, but it's something you should consider. I found out that the left foam pad on the holder was also deformed by my bass' (a Squier) weight and its asymmetrical headstock. I don't know if that's supposed to happen, but it did, although it doesn't seem to impact on the stand's functionality.

Overall, it's a nice product that feels very well made. So far so good. I will update this review if the stand drops my bass in the future, but I highly doubt it anything like that will happen.
Auttava · Ei ole auttava · Raportoi ongelmasta
Raportoi ongelmasta...

I want bough this stand instead of the HCGS-414B+ cause I prefer having something more sturdy than transportable to be sure my precious doesn't fall on the ground.

So, when you have to travel, this stand is not the smallest one due to that but this is something I totally fine with: Better safe and taking more space when traveling than the opposite.

I also very like the protection on the front legs to protect the back of my guitar.

Työnjälki Vakaus
Alex Bolero, 27.01.2020
The best guitar stand I have ever used! I never had a problem with it. It supports all types of guitars, from classical to acoustic, to electric and 5 string e-bass. Very stable and well made!
Auttava · Ei ole auttava · Raportoi ongelmasta
Raportoi ongelmasta... 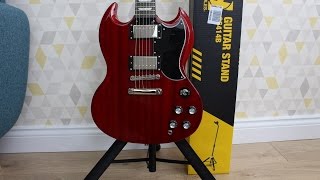 Näytä kaikki
Guitar Accessories
We investigate some of the many accessories available for both guitar and bass.
testitulokset:
Lue arvostelu