John Lennon played almost exclusively on a Epiphone Casino semi-acoustic from about '65 with the Beatles. Originally, the guitar had the present-day Sunburst finish when in 1967, during the course of the psychedelic fashion heyday, it was completely psyched out, only to be then freed from all colour only one year later. The result was the 'Natural Finish', which can be admired in the film 'Let It Be', and later on in 'Imagine'.

In contrast to most current semi-acoustics, the Casino does not have a sustain block, so the top can resonate much more freely. This makes the Casino more susceptible to feedback, with distorted lead sounds being rather more delicate, and the clean or crunch sounds are unique at that: Fabulous dynamics with a good and proper piece of wood. Simple Beatles sounds are easy (even George Harrison often played a Casino), but also for blues guitarists, the Casino could be their guitar for life!

Ominaisuudet Ääni Työnjälki
The guitar of my dreams
Stebbi G, 18.08.2021
I for some reason found myself in a Beatles coverband, that then migrated to 60s/70s Rock. All the while, I felt a dissatisfaction with my electric guitar, a Fat Strat, as it was both heavy and also my guitar playing didn't feel natural.

I saw a local ad for a Casino Coupe, and tried that. I loved it, but unfortunately I got pipped by a higher offer. I then went online and discovered Thomann and this guitar. When it arrived, it felt like I finally had a guitar that was meant for me. It is light, the action and the neck feel just right.

Some people have balked at the "made in China" label. And yeah, I get it. Some parts do feel cheaper than they should, esp. the tuners. Tuning the G-string is sometimes unbearable (although I hear that is a common problem with this sort of guitar). And the famous epiphone "E" on the pickguard was a bit loose. On the whole though, in my case, this was outweighed by playability and comfort.

Ominaisuudet Ääni Työnjälki
Сharm Casino
AlexGr, 02.07.2019
One month's experience of owning a guitar allows you to say something.
The guitar is very charismatic. In the hands lies as an extension of yourself. The continuation of your hands, your thoughts. The guitar is very light and "dry." The guitar is assembled very high quality and neat.
The sound without an amplifier is very soft, velvety, round and deep. Sometimes I even forget to turn on the amplifier :), the sound of this guitar is so good.
At first strings rattled in three or five places of the neck. I didn’t do anything with it (I was afraid), and a week later, rattling disappeared.
The only thing to do is drown deeper the head of the screw on the picgard (the fingers were scratching), although some guitarists remove the pickguard.
Now it is necessary to cut the grooves on the upper nut, the strings in the first frets are clamped with some effort.
Auttava · Ei ole auttava · Raportoi ongelmasta
Raportoi ongelmasta...

Ominaisuudet Ääni Työnjälki
That authentic sound
SongManNic, 06.03.2020
For the price, this is a very good guitar, that I use quite a lot in the studio, because it has a very "personal" sound that is distinctively Epiphone Casino. The guitar however, in my instance, required some adjustments to get it playing well, be in tune and for the strings to not buzz against the frets. So it was not like it arrived and was plug-and-play from the get go. But that is easily fixabla. Overall if you want the original early The Beatles sound, then this is the guitar – without you having to spend a gazillion on it. It's great also for mellow jazzy stuff and it can certainly rock too. I'm happy that I have one and I use it a lot.
Auttava · Ei ole auttava · Raportoi ongelmasta
Raportoi ongelmasta...

Ominaisuudet Ääni Työnjälki
Authentic Beatles look and sound
Dub77, 05.04.2021
This guitar is amazing. It’s completely different to any other guitar i have played. It’s completely hollow so it really rumbles and resonates against your body.
It does feedback a lot with high gain and due to being hollow with no centre block, the neck sits further up the body, meaning you cant really use the high end frets.
All that said, this is perfectly fine as it is really a rhythm guitar and not really for fast lead playing.
I bought this for its iconic beatles status and it really doesn’t disappoint.
It plays incredible and looks super cool.
Im so impressed that I may also buy the natural finish to look like the john lennon later years too.

Electric Guitar John Lennon played almost exclusively on a Epiphone Casino semi-acoustic from about '65 with the Beatles. Originally, the guitar had the present-day Sunburst finish when in 1967,...

Semi-acoustic guitars John Lennon played almost exclusively on a Epiphone Casino semi-acoustic from about &apos;65 with the Beatles. Originally, the guitar had a Sunburst finish when in 1967,...

E-Guitars
Electric guitars are ten a penny and nowadays there are at least as many models and makers to choose from.
Kiinnostavat tarvikkeet 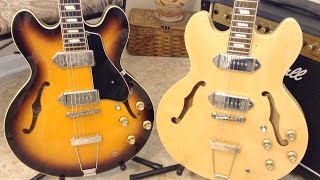 Näytä kaikki
E-Guitars
Electric guitars are ten a penny and nowadays there are at least as many models and makers to choose from.
Näytä kaikki
Guitar Setups
The range of available guitars and amps has never been greater than it is today, and a huge variety of sounds are easily accessible.
testitulokset:
Lue arvostelu