Estabilidad Fabricación Manipulación
Great hi hat stand BUT with a problem
Alex Krvs, 29.06.2021
So all of my hardware are Yamaha and I wanted to make an upgrade from the cheapest Yamaha model to this.
I bought it from a local store, and it had a problem with its direct drive. Whenever you played the pedal fast and with heel up technique, one faulty bolt made a metallic sound which would be recorded and heard while playing as an extra note. The Yamaha service in my country told me that that was faulty, and it needed to be replaced. So now I know for sure that its faulty. Then a second hihat came from the local store with the same problem. Now since the second one was the last one in my country I gave it back and bought it from Thomann.
!!!!AGAIN!!!! Same problem!!!
Since Yamaha though already told me that this was actually a fault, I returned the item back to Thomann and asked for a replacement.
The replacement finally was awesome without any problems.

I still like Yamaha hardware, but this hi hat stand came 3 out of 4 times, faulty.
That's my experience and that's why I added one star .

Now or the PROS... I previously also bought the DW 5000 series Hi hat stand with three legs. It was definitely bigger and heavier, but it wasn't stable at all... It moved a lot.... Something that this hi hat stand doesn't do… It is stable as a tank.
Útil · Poco útil · Reportar evaluación
Reportar evaluación... 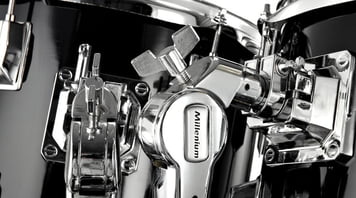