Uso Características Sonido Fabricación
The best: battleship, sound, keys, arpeggiator, modulation matrix, supports samples The worst: without input controls, to the au
beatterri, 23.09.2018
to start is a waldorf, it's not a common synthesizer, also you have to keep in mind that there are not many keyboards of this manufacturer to choose and If we look at the market, we will not find many with the same conditions, with the ability to modulate samples, wave jumps, fm synthesis, substantial synthesis, additive synthesis and that are polyphonic with 16 multitimbral parts. ... that makes it more exclusive.

When I took it out of the box for the first time I was impressed by its futuristic, compact and modern design, weighs 8 kilos, its appearance from the beginning gives that feeling of robust quality, its bright and perfect keys without any imperfection in their lines make clear that is all the work of a good product of the manufacturer.

This German synthesizer has been used in electronic music for a long time,it came out a year later than the desktop version, n 2019 will be 10 years old and it will still be the only wadorf synthesizer with 16 multi-factor parts.

many themes of avant-garde music and pop content such as trap and dubstep contain a blofeld waldorf among its tracks, it is very recognizable by its more trance-like sound and glitch-like bass. .

he defends well in front of an access virus, nord lead ...

this keyboard where it shines the most is in its interior, its minimalist aspect does not do justice to that feeling of having nothing, even so, in its interior hides a whole ecosystem of incredible possibilities.

after almost 10 years this synthesized does not age and continues in the market being of interest to many musicians, its junior hermeno is the modulo version, all a success of sales for its price so low in the market, but the keyboard will hardly see it secondhand and if you see it, it will be in small quantities, sometimes ... it is not very frequent to see them for sale.

to start with waldorf blofeld is a digital synthesizer with 25 voices of polyphony (not bad for only use 10 fingers...) has 3 polyphonic VCOs oscillators with 66 wave types to choose from and another 20 that we can create through our computer and also the option of using samples to use them as an oscillator source.

has a cutoff of 127 steps, the vast majority of digital and analog synthesizers have potentiometers with digital coding with much less steps, which is what is really important in the end in a filter.

it does not have a sequencer, but that's not going to be a problem, because its arpeggiator covers those needs well, the arpeggiator is editable and works as a 15-track drumtable with 16 steps at most, besides that you can also change the notes for create impossible melodies, is arpeggiating with a device that divides a MIDI chord input into your individual notes and repeats them rhythmically, ideal for handling other synths with the powerful arpeggiator that this synthesizer has.

Different sequence modes can be defined for the arpeggiator, to cover a wide range of applications.

In addition to the synthesis features, the Blofeld offers a deep programmable arpeggiator for each sound program.

The arpeggiator uses a list of notes that can store up to 16 notes in each of the 15 tracks in the rhytm rom. This list is established based on the configuration of the parameters of the arpeggiator.

Blofeld has two filters and 3 LFOs, multiple FM processors and internal routing of modulation and effects and process destinations.

it has a Glide with the random timing / -3 ... + 3 and it also has the knobs for the filter sweeps, they can not be done at once, they have to be done at least in two laps and depending on the speed that we do it moves more or less distance moving the same degrees, although this is also configurable to the taste of the musician.

it has its serial software but there are also unofficial ipad editors for blofeld.

without a doubt it is a very serious synthesizer with many users behind it, I have had several high-end synths such as access, clavia, roland, yamaha and it gives me the feeling that this synthesizer is high-end to medium-range property 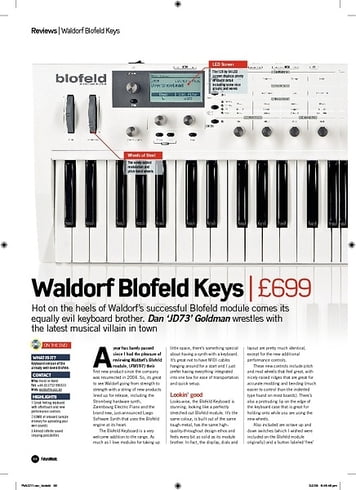 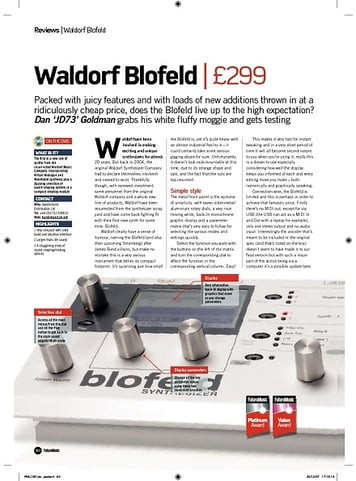 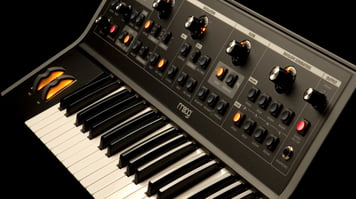 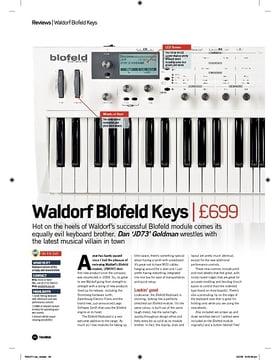 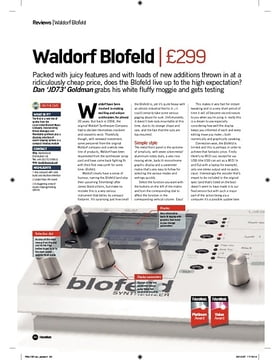 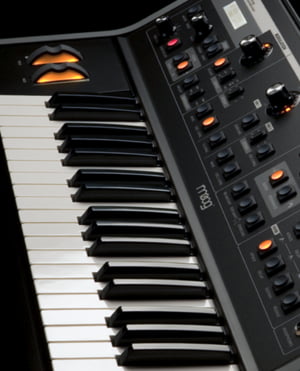