A detachable modular 'snake' for the MTS system is incredibly useful when parts are either: awkward to transport, or prone to damage.

For live use with a function band, being able to leave the 16/4 strands permanently attached to the desk (an A&H QU16) makes setup that bit quicker and easier - and when setup times are often very restrictive (a wedding band often has 45 minutes to set up an entire sound and lighting setup for 4-8 musicians), anything that saves a few minutes is a godsend.

This, when combined with the MTS stagebox and a 30m MTS 16/4 cable greatly simplies setup, but also restricts mess and potential for trips etc - one cable running back to the desk, rather than 20.

Attaching/detaching is quick and easy, but reassuringly solid, and the included plastic cap for the multipin connector is a nice surprise extra.

In an educational install, the ability to 'put away' parts and elements that normally sit out and gather dirt, dust, chewing gum and general grime is invaluable. Being able to put this and the stagebox away when not in use will extend its life no end!

Cons:
An odd one, but the labelling on the snake strans is on the wrong side: it's on the underside of each XLR, which can make it annoying to both patch in, but also means you cannot quickly check visually that things are patched correctly.

Fabricación Manipulación
Great Modular System
Dd Music Group, 14.08.2019
This line system is great for the price point and is worthy of tours and festivals of all sizes.

My only gripe is that the ends do not come grouped, a bit of LX tape soon sorts this though.

The red returns are awesome in dim light too!

Fabricación Manipulación
Good quality for the price
03.10.2016
I was surprised by the quality of this breakout loom, the strands don't feel thin, cheap and nasty.
The only slight con is that the XLR plugs although not Neutrik and Multipins not Harting, they are of good quality and all fit reassuringly well, but then if they were then the price would go up quite a bit.

It lives in the road case plugged into the desk (X32 Compact).

Once the lid is off all I have to do is connect the multi-pin connectors of this and the cable, then the cable and stage box and we're done (see also review on MTS -30 cable and 164 SB stagebox).

The connections (signal wise) have been 100% so far, no problems at all (4 months good use), no interference that I have noticed. Well satisfied. 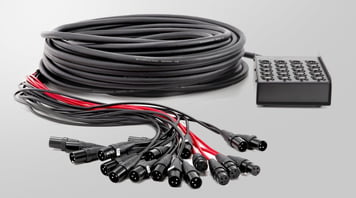 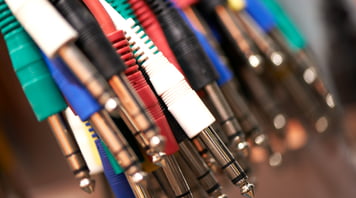