Fabricación Cantidad de humo
HZ-200 Hazer
21.10.2014
So I?ve waited a couple of months before writing this review so I can update on the problems I found

I play in a typical 5 piece pub band so venues can vary from small little pubs where we?re shoved in a corner to occasional functions / weddings etc in larger halls. Using haze really makes a huge improvement to the visual aspect of the band, we don?t have many lights and only cheaper ones but haze just makes them pop out and really gives atmosphere.

The 1st gig we did with haze was a very large pub/club with their own built in lights and it was incredible, using the unit stand alone with the supplied remote control to vary amount of haze and interval. The haze was fine and light, no adverse effects on the singer.

The next gig was a small-ish pub and I couldn?t get the hazer to produce a low enough level of haze, even on minimum settings it was too much for the small pub so I had to keep switching it on /off during songs (on the remote) no major problem but was a pain. we only want a very fine level of haze not a thick fog type effect.

I then decided to go to DMX control from the laptop, which we always have on for playing background music before, in between and after sets. A £5 dmx cable, freestyler software (free) and ½ hour working out how to do DMX and I can now have much better control of the haze and get it really low for very small venues. This problem is only relevant in SMALL pubs, the sort of place that is a squeeze for a 5 piece band. I?d seriously recommend running DMX as its so much more controllable than the handset but the handset does work ok.

Now we?re running haze via DMX we use it at every gig and we absolutely love it! We?re looking into better lights and lasers now to make the most of it. It uses hardly any fluid, I can?t believe how little it uses. 5ltrs will last so many gigs. Without DMX we couldn?t use it at every gig and the review would be worse, but still good. I think this low output is a problem on all budget hazers and for £5 to run DMX its worth doing.
Útil · Poco útil · Reportar evaluación
Reportar evaluación... 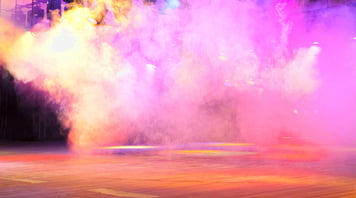