Sonido Comodidad Fabricación Außengeräuschisolierung
A conflicting pair of headphones
Wielher, 30.01.2020
I'll start by saying that I returned these back and explaining why at the end.

Aspect:
At first glance they have a good build, seems sturdy enough, with plenty of metal and leather-type material where other manufacturers go for plastic. The case was also decent, but I feel that the headphones were sitting a bit squeezed in there and I am not sure if that stress will make them rattle in time, since the pressure is on the pivoting point.

Sound:
Although marketed as having 16 hours of battery, it's really going to be 8, due to the very poor sound you get when noise cancellation is off.
When NC is off, you get a thin, papery sound, which felt very underwhelming for the price. With NC on, the sound spectrum feels a lot wider, bass is what you can expect from so called studio headphones, i.e. there but not really as colored and plump as on Sony's or Bose hi-fi / media headphones. Still alright though. Good thing is that NC works wired too.

Regarding NC, I tested these in the same office as a colleague's Bose QC35 and I they do not compare. NC is alright, but you still hear a certain hum, like when you put your ear to a seashell, if no music is playing. The QC35 made everything more quiet. The ERIS HD10BT seem to be working more with lower frequency as it took away the rumble from air conditioning, but not the entirety of the sound. People around you sound like if they were speaking through a phone receiver. Generally speaking, they might be alright for reducing traffic noise and lower-end rumble, but not much else. Although, compared with a pair of Sony WH-CH700N, it's better.

Microphone:
It's bad. In a quiet room, the person I called could barely hear me. For using the mic while wired, you'd have to buy an additional third-party TRRS cable, as the 2.5 one included is TRS. Which makes sense for so called studio headphones, but be warned that out of the box, the microphones works only when using bluetooth.

Comfort:
This is why I returned them. They enclose your ears decently, but there is not enough clamping pressure and it feels like you are balancing them on the top of your head, at times. They also slide to the point where they fall, if you lean back. I'm 1.80m, big head, long hair. Due to the lack of clamping pressure, they also do not isolate sound that well, without NC.

Mostrar todas
Auriculares
Headphones are basics for any studio or DJ. But not all headphones are created equal. 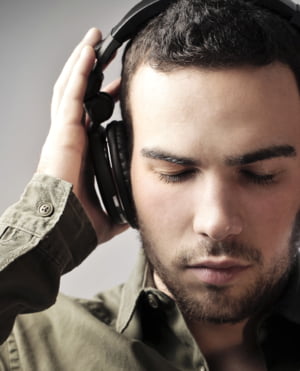