Características Fabricación
Just one negative
NatrelAcoustix, 24.05.2020
I think evryone else has covered the main good points of this little loop switcher. And, it is good. Obviously it would be nice to have more power outs and an extra loop, but my 'negative' issue is this: Whilst using the unit at home I never really noticed this issue, but live... It caught me out. Twice! When the unit is in tuner mode and silent, it de-selects your existing loop. When you come out of tuner mode your all of a sudden in by-pass, but it isn't true by-pass. you then have to step on the switch of the loop you want... that then puts that loop into by-pass... Then you have to step on the switch again to select it! Pain in the bum!
If you know this is going to happen however, you can re-select your loop whist in tuner mode. Then, when you exit the tuner you're ready to play in your chosen loop. I hope I've explained this well and I don't know if it's only my unit that does this. Maybe reviewer's in other languages have mentioned it? Once you know it has this odd quirk it's not a massive problem, but it was embarresing live when you start a heavily guitar affected tone (meant to be delay, chorus, overdrive) squeeky clean. It turned a few heads in the venue. We laughed later... Much later.
Útil · Poco útil · Reportar evaluación
Reportar evaluación...

Características Fabricación
Awesome Stomp Controller
RomadDan, 27.05.2020
The first one I received I had issues with; however, I contacted Thomann and had a replacement in a couple of days.

I use the Stomp Controller for easy and quick switching between my Overdrive and Distortion Pedals. However, you can mix and match with your Distortion/modulation/reverb pedals as well.

I’ll tell you this thing is easy to program, no delay or noise when switching between channels. It has built in power that works great and removes the need to have a separate power supply (at least for me) and is Duel Voltage (110v-220v) so you can use it in the States or Europe! 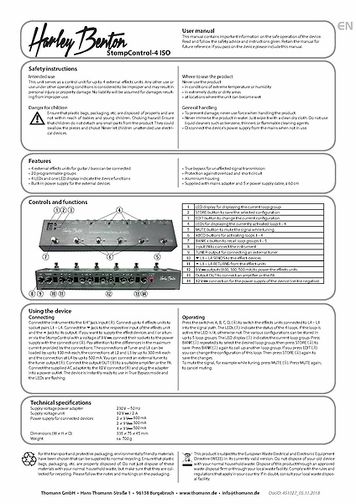