lyd bærekomfort forarbejdning
B Sommer, 28.02.2020
The HD-600s sound just excellent. I have bought them after quite a while of not access to decent sound at home. As I tried them on for the first time I ended up laying down the floor absolutely engulfed in the sound. They are incredibly comfortable and never feel heavy or tight, no matter how many hours they've been worn.
Remember, these headphones have an open back, so everyone can hear what you're hearing. They can be used in places where there's nobody to care about that and in the studio as they also allow you to hear exterior sound. I find wearing them outdoors great too as I like to be in touch with the exterior sometimes.
While you may not be so happy about how heavy the bass is (there's no added bass and they are clearly not purposed for use as a DJ), you will find them perfect for music purposed for deep listening.
All in all, I adore them, but just be careful about what you want and need!
Nyttig · Ikke nyttigt · Anmeld bedømmelse
En "forkert" vurdering.

lyd bærekomfort forarbejdning
Great headphones for intermediate home studio enthusiasts
imreych, 19.06.2020
My only other studio headphone is a Sony MDR 7506 (closed back), which has a better bass response but is not as balanced. The HD-600s are much clearer, especially in the mid-highs and highs. They also result in lower ear strain after longer periods of listening. Comfort could be a bit of problem in earlier weeks/months of use, as the headband was a bit tight. But, it improves over time.

As many, my biggest complaint is the cable: There are two connections on left and right, which make it hard to put on and remove the headphones quickly. The connection points also seem very weak, so a replacement is likely. Perhaps more importantly, the long cable, which is made of a sticky plastic, has a tendency to get stuck in all the wrong places. Why doesn't Sennheiser switch to a coiled cable with a single-side connection? Or, offer an additional short cable?
Nyttig · Ikke nyttigt · Anmeld bedømmelse
En "forkert" vurdering. 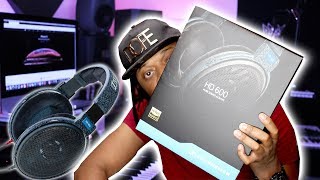 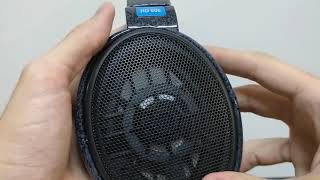 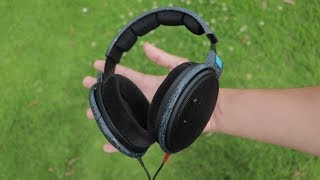