Bemærk: Register your purchase at www.w-distribution.de/Warranty for an extended warranty of 4 years.

forarbejdning
A very useful little gadget...unless you like mess and tangles!
80 Proof Mojo (Band), 23.08.2018
The Rockboard MOD series 1, 2 and 3 are designed to integrate with most of the new Rockboard pedal boards (which are built like a tank/Panzer....sorry!)
Sure you could just mount your pedals and have the cables trailing everywhere, but if you're like me, a little bit OCD, then you need one of the MODs.
One Mod has 1/4" jacks as ins and outs, another has Midi ins and outs (presumably aimed at the keyboard players). the Mod 3 I bought has three 1/4" jacks ins and outs, an XLR Mic input and two XLR Mic outputs (L & R or independent)
All cables can be routed beneath the pedals and connected to the Mod3, making for a very clean stage appearance and quick set up and break down.
I use one 1/4" output to my guitar amp, the other as a spare in case my wireless system breaks down, I can use my Morley switcher to go from wireless to cable. Fast and efficient. As I use a TC Vocal FX for echo, I have mounted that beneath the floorboard connected to the Mod3. Again, nice and neat and it just works.
The Mod 3 also has a power link for a kettle lead which powers my Voodoo Lab Power Supply. You don't really need the Rockboard the tray to be honest. I bought it on spec, but it's never left the box.
Highly recommended as a package is the Board and the Mod units.
Nyttig · Ikke nyttigt · Anmeld bedømmelse
En "forkert" vurdering.

forarbejdning
Perfect
BassManKevin, 23.01.2021
Excellent bit of gear, I use it to split a Di to FOH and to IEMs!
Nyttig · Ikke nyttigt · Anmeld bedømmelse
En "forkert" vurdering. 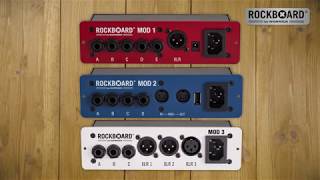