features lyd forarbejdning betjening
the definitive hard-clipper and benchmark for heavy distortion pedals
Peter FC., 12.10.2020
Unlike overdrives which used soft-clipping diodes, like the Tube Screamer, the Rat employed two symmetrical diodes to ground after the gain stage, resulting in a hard, square-wave clip. However, that’s not the end of the RAT’s tone story; it’s actually a little weirder than that.

The Rat has found a home on countless guitarists’ pedalboards, from shredders like Nuno Bettencourt to a who’s-who of grunge and shoegaze. Most notably, Rivers Cuomo from Weezer is a fan, and all the members of Nirvana are known to have used a RAT - although admittedly, Dave Grohl with his later band Foo Fighters - while shoegazers like Neil Halstead of Slowdive and Mark Gardener of Ride are also owners.

The distortion pot controls voltage gain, and thus the amount of clipping. On paper, it can deliver a whopping 67dB of gain, but in practice due to the slew characteristics of the LM308 op-amp, this number will not be reached. Despite the RAT shining at higher gain settings, it’s also a surprisingly solid low-gain drive, particularly for boosting dirty amps, and has a fantastic mid-bump.

The filter, or tone control, is a simple low-pass filter. With the bass pulled back, the signal will be closer to a square-wave, while with it fully open, the response will look almost triangle-wave shaped. Obviously, the EQ settings on your amp will also have a significant effect on the overall timbre and EQ profile of the distortion.

Unlike some other pedals, changing the output volume will not alter the tone, thanks to a JFET buffer between the two circuit blocks. The output block is a simple 100K pot blending signal to ground.
Nyttig · Ikke nyttigt · Anmeld bedømmelse
En "forkert" vurdering.

features lyd forarbejdning betjening
ProCo Rat 2
16.03.2017
I remember wanting to buy one of these in the 80s (I should have as the originals are worth a fortune now). It is a very distinct sounding distortion, but I have to admit would challenge some very expensive boutique pedals attempting to do the same.

The tone control is not what can be described as subtle. At either end you are in 'muffled' sounding with no mid or top end and at the other end your ear drums being scraped out violently with rusty nail, with, as always the happy medium at 12 o'clock.

In terms of power DON'T FORGET TO PURCHASE THE ADAPTER or you will be stuck with using batteries.

There is also an extreme amount of distortion available up to and bordering on fuzz territory, and it is quite unique.

And then we come to the price, around 70¤ ...... how can you go wrong for this price. It is built like a brick (and also weighs like a brick) and totally over engineered being probably be one of the few remaining remnants of human civilization after the 3rd word war (it is built that well).

It gives you that classic 80s distortion and lets you re-live the drive sounds you remember from your youth, whilst helping you through mid-life crisis.

At the current market price, you have to have one in your gig bag. It is a must!

features lyd forarbejdning betjening
Absolutely my favorite distortion pedal
Teutonic Terror, 04.08.2019
I generally play 80s-style hard rock, so I had a pretty specific idea of what I wanted out of a distortion pedal. My intention was to play through the clean channel of my amplifier and achieve whatever distortion I wanted using pedals, so that my tone would remain reasonably consistent at any volume. The ProCo Rat 2 delivers what I want almost exactly. The distortion can be adjusted from a relatively mild overdrive to a snarling crunch to fuzz. It is also a fairly quiet pedal, which honestly surprised me for such an inexpensive piece of kit.

Cons:
Construction. This pedal is built like a tank, but the casing is held together by screws which also hold the little rubber feet in place. In order to mount the pedal to my board using Velcro, I had to remove the screws, remove the feet, then replace the screws. The battery cover is also held in place by an enormous screw which must be removed in order to use Velcro. And the paint finish has an odd texture that makes adhesive-backed Velcro hard to attach. This is all easily overcome, but still a bit irritating.

The Rat 2 also doesn't play well with other boost/gain/overdrive pedals. The sound is a little "dry," so have tried throwing both a TS and a TC Electronics Spark Plug in front of it' both give me a somewhat "wetter" sound, but they also introduce more noise than I would like. I regard this as a problem with the other pedals, though, and I'm sure I'll find something quieter.

The price. I'm amazed that I found a pedal this good for around euro 75!

It's solid as can be!

The sound! I absolutely LOVE the way this pedal sounds, and how flexible it is.

Edit: unfortunately, the noise problem is NOT the other pedals but appears to be the result of the 1980s-era circuitry. Although I really loved the Rat 2's sound, I just couldn't stand how noisy it was in combination with other pedals and ended up replacing it with a clone.

However, this is still a good classic pedal. It didn't work for me, but the popularity of this pedal with big-name recording artists of the past says a lot about it. I would still recommend it to people who want to experiment.
Nyttig · Ikke nyttigt · Anmeld bedømmelse
En "forkert" vurdering.

Distortion Effect Pedals
A classic Ibanez Tubescreamer or Colorsound Tonebender can fetch many times its original price from guitarists in search of the ultimate killer tone and sustain.
Gratis download 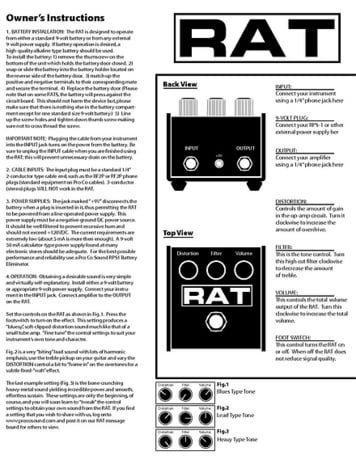 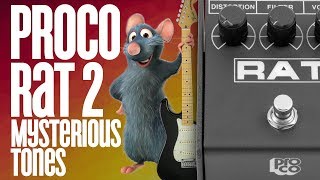 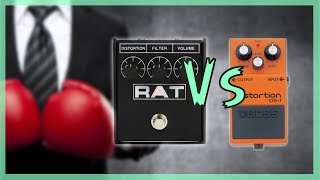