send melding
forarbejdning
They are ok
Xealz, 30.05.2021
They do work, and they're better than nothing, they are quite wobbly and can easily tip if you bump into them, I haven't had any problems with them and I'm quite satisfied with the product, could've been better though. they are a bit small for the Yamaha HS8 though.
Nyttig · Ikke nyttigt · Anmeld bedømmelse
En "forkert" vurdering.

send melding
forarbejdning
Price reflects product
fiskarinfo, 30.10.2017
This is a cheap product and they're not really more than OK.
Probably the first product that I've not given top grade. The stands had several dings and knocks that they had received during transport due to poor packaging. A first in my experience with Thomann. The stands were cheap and I don't plan to show them off to my neighbors. The assembly is pretty straight forward, but I couldn't get them to align properly, the height was all right, but the plates that you put the monitor on, aren't the same, which really sets of my OCD.
In short, buy them if you don't have a stand, as a start. I would pay a bit more if I were to buy stands again.
Nyttig · Ikke nyttigt · Anmeld bedømmelse
En "forkert" vurdering.

Monitor Stand Cast round base, For direct mounting of monitors with 3/8" thread connection, e.g. Genelec 1029 monitors, or for fixing a mounting plate for Genelec 1030 or monitors from other...

Set of Height-Adjustable Monitor Stands For near-field monitors, Panel surface: 23 x 23 cm, Height adjustable from 93 - 115 cm, Load bearing capacity up to 20 kg, Length of each side of base 45cm,... 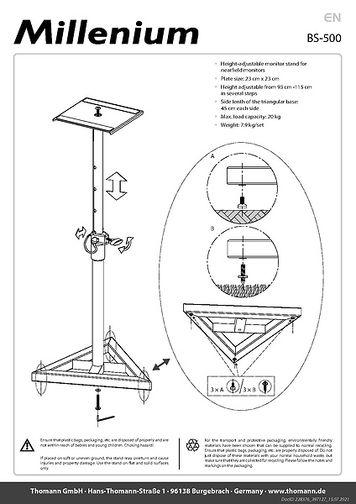