send melding
features lyd forarbejdning betjening
Reverb settings are way too high
Maxie, 05.11.2017
It is a great pedal. However, reverb settings are way to high. For my needs 5% of the knob value was giving the results I wanted. Everything above sounds way too much.
Nyttig · Ikke nyttigt · Anmeld bedømmelse
En "forkert" vurdering.

features lyd forarbejdning betjening
Good sounding, simple to use Reverb pedal
Longy, 25.07.2020
My main two amps are vintage Fender's - A 1966 Princeton Reverb, and a 1972 Deluxe Reverb. For practice I have a 1 watt Marshall 50th Anniversary JMP-1 Combo. There is no reverb on that, so I needed a reverb pedal. On my amps the reverb is controlled by a single knob. So I wanted a pedal with that same simplicity - plug in and turn up the reverb to the required level. I'm not interested in things like dwell and tone that are on other reverb pedals. I just want it simple like my Fender amps.

The Spring setting on this is good. Not as good as the Gibbs reverb tank in my PR or Accutronics in the DR. It doesn't sound as wet. But those are the ultimate reverbs in my opinion, and no pedal will match that real sound and feel.

The hall and plate settings sound nice too, but I don't have any experience with plate, so can't offer a comparison.

I would recommend this pedal for an easy, no fuss, turn up and play reverb pedal.

Note to UK buyers: this is supplied from Thomann with a 2 pin EURO plug, so you will need a travel adapter for UK sockets.
Nyttig · Ikke nyttigt · Anmeld bedømmelse
En "forkert" vurdering.

features lyd forarbejdning betjening
Distant sound of thunder...
TheEnforcer, 19.06.2021
Everytime I dare to watch Bill Ruppert showcase an EHX product, I end up buying something...
When I heard the demo, I knew it will be mine, as it really nails that "Pulse" era Gilmour reverb nicely. It has found a permanent place in my pedalboard and it always makes me smile when I engage it; lush, moody and very distinct, it really has a nice tail. All the "settings" are good, but plate absoulety takes the cake and I'm glad they made this version without the horrile "flerb" on the original HG.
It is however by default a very one trick pony, so take some caution when considering it as your next reverb. It sounds awesome if you are lusting after the specific sound it delivers, but variety is pretty much non-existent outside of the three-way switch for the type of verb.
One issue it does have is the sweep on the only pot it has and that's why I've opted for a four star rating instead of five. It really does not have much of a sweep and once you engage it it is basically on, even with the mix knob set at zero... And once you start dialing more verb into the mix it is quickly obvious that it goes from moderate verb to a boatload of verb in a matter of a millimeter of a turn and it's reverb galore from there on.
If used in a loop the problem is not as big as you can dial the verb in nicely, but in front of the amp it quickly drenches your sound with crazy amounts of reverb. Sounds awesome on leads and clean guitars, I've also used it on synths and it worked like a charm.
Built like a tank, like everything from EHX so no issues there.
Nyttig · Ikke nyttigt · Anmeld bedømmelse
En "forkert" vurdering. 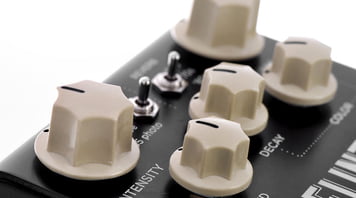