betjening features lyd forarbejdning
jeppp, 06.01.2021
I bought this keyboard as a simple keyboard for practicing and learning until I thought myself good enough to buy something better. I feel like I had my money's worth and it has everything you need to start practicing and learning, but I feel it's very easy to outgrow it pretty soon.

It is exactly what you would expect from a Casio keyboard at this price range. The keys are velocity sensitive but they have no weight to them, so it's a bit hard to handle velocity with it but, yet again, very hard to find anything much better at this price.

Sounds are ok. They are the classic Casio sounds you might expect. Although it says it has 400 sounds, it has a lot of repeated sounds. Sounds are decent enough. Sustain pedal function changes based on the sound, sometimes it works like a piano sustain and sometimes it just holds notes indefinitely, which can be a bit awkward for some sounds. The built in reverb makes sounds much nicer.

I did not get too deep into other features as they are kind of gimmicky. Rhythm section accompaniment is useful when you're tired of hearing the metronome. Dance music mode is really nothing too interesting or useful. The learning app might be interesting to some, but here I'm reviewing the keyboard itself.

It can work as a MIDI keyboard but without any sort of velocity sensitivity, which I think is quite an odd quirk.

Overall, it's an excellent beginner keyboard that has everything you might need to start learning songs and practicing, it also serves as a really compact jamming tool to bring to a friend's house to have some fun. For the asking price it's features are more than appropriate and I'm satisfied with it.
Nyttig · Ikke nyttigt · Anmeld bedømmelse
En "forkert" vurdering.

betjening features lyd forarbejdning
Portable and useful
Raul Lagos, 31.07.2020
I'm not a keyboard player, but I needed one to use other sounds (guitar, strings, organs, etc) in my recordings. I was looking for something cheap, compact and good quality. I was in between a CTS200 (because of the colours), the CTX700 (because of other comments and reviews. It's so ugly though!) and this one. At the end the CTS300 won because of size, portability and sensitive keys (compared to CTS200). The sound is more than ok for an eternal amateur like me. My favourite thing is the small amount of buttons since it has only 9 (not counting power and volume) so it is really easy to use. Just plug it and play! It has a really handy control wheel that allows you to move in between sounds. It also has a pitch wheel which I don't use much particularly.
The quality is OK, but the feeling of the keys is too plastic. I'm not complaining though.

In my opinion, if you are an amateur like me, get this one. The CTS200 is tempting but CTS300 has sensitive keys.
Nyttig · Ikke nyttigt · Anmeld bedømmelse
En "forkert" vurdering.

betjening features lyd forarbejdning
Nice keyboard for beginners
cizzu, 20.11.2020
Very nice keyboard for beginners and perhaps even intermediate players. Has dynamic keys and aftertouch. Simple interface, solid build, 4 octaves. I like that there are just a few buttons with simple and intuitive functions.
The sounds are not great, I think this is mostly because of the speakers, as they improve quite considerably when using headphones. I anyway I use the USB port to connect it to my laptop and use the garageband sound library. Works like a charm.
Nyttig · Ikke nyttigt · Anmeld bedømmelse
En "forkert" vurdering.

betjening features lyd forarbejdning
Little beast
Cavalex, 24.11.2020
Considering the ratio between small dimensions and all the features of this keyboard, maybe I shall give it a 5 star rating. The only disapointment were the piano sounds which sound a bit too artificial. However, having so many sounds and many internal songs, but especially the dance function (not to mention the practical handle to carry the keyboard around) make it an absolute winner in it's price class.
Nyttig · Ikke nyttigt · Anmeld bedømmelse
En "forkert" vurdering. 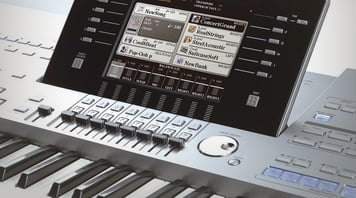 Choosing a Beginner's Instr.
The first hurdle though, is to decide on which instrument to learn?
Interessant tilbehør

Vis alle
Choosing a Beginner's Instr.
The first hurdle though, is to decide on which instrument to learn?
Vis alle
Portable Keyboards
Portable keyboards now offer a wealth of features to suit both the first time musician and professional songwriter alike.