Just a bit of a shame that the AM Yellow doesn't seem to be that much of an exclusive as they stated.
Nyttig · Ikke nyttigt · Anmeld bedømmelse
En "forkert" vurdering.

betjening features lyd forarbejdning
A beautiful yellowbox
MesmoChicago, 30.06.2020
I have always wanted to own and be able to use a TB303 in my music for approx 30 years! the desire never went away , I missed the first round has money was very tight in the recession hit 80`s. So heads up to 2020 and Behringer have done exactly what a progressive music manufacturer should and recreated the "magic box" exactly and then some ! Since receiving mine a few weeks ago , I have had the time (due to the virus) to forensically learn the instrument inside out and although it inherits the much written about sequencer which can be regarded has a very big plus or a minus depending on your viewpoint , in 2020 it doesn`t matter because the USB and synth app supplied takes care of the "mad" button programming many used with the old Roland unit . You can plan and write some very structured musical basslines that sound incredible. The factory sequences are just that , they do not allow the little box to show off but I found an increasing amount of custom sequence packages on the net at very low cost , they became my templates for learning the art of programming this unassuming beast of a box. Mine is now complete with 64 dance ready basslines and with the inclusion of the A/B structure of the pattern play you can alter the main bassline A ever so slightly and program it into B and instantly have those iconic changes in emphasis and dynamics that make a killer techno or house tune . I have a Roland TR-3 and owned it for a good few years and if I was asked to compare the units It would not even come close, the TR-3 was a design experiment for Roland and they forgot about the end user whilst building it , It can sound good in a track but in comparison with the Behringer it is quite pedestrian, it is the sound of the unit that lets it down although full of presets the sound mangling that is so intuitive with the Behringer is just not there . There is no envelope to tweak (big mistake) so it will not sing like an actual bird ! unlike the Behringer . So in summary Behringer have it the jackpot with this well connected clone of the original TB303, the fact it is faithful to the electronics and is squarely analogue and is fully open ended due to its USB and MIDI capabilities , so programming killer basslines will become quite a lucrative cottage industry. The price which I have not mentioned thus far is another gift for a gift that just keep giving . All in all buying a TD-3 is a complete no- brainer everyone should own one , like back in the day these things usually sold in two`s because house and techno back in the eighties used to double up the bass to create more complexity .
Nyttig · Ikke nyttigt · Anmeld bedømmelse
En "forkert" vurdering.

betjening features lyd forarbejdning
So much fun
Ranzig, 11.11.2020
What can i say about the best clone of the legendary 303, for a price that made me buy 2. You cannot have enough 303's!

It's light but solid built. The software editor is for people that do not want to get into the copy Behringer made of the original editor. I must say it's a bit weird when you use it for the first time. Jumping through the pattern is can be tricky since there is no indication at what point in the pattern you are. But.... it was the same with the original. Yes it's hard to program if you don't use the software. But the quality is just excellent, it's really good! And the price is insane.
Nyttig · Ikke nyttigt · Anmeld bedømmelse
En "forkert" vurdering.

betjening features lyd forarbejdning
The 303 sound on a budget
Stamatis Stabos, 13.10.2020
I bought the TD3 along with the RD6 and it's really nice product for the price its a little bit complicated to make a pattern but you can watch tutorials on youtube and figure out how it works, the sound is amazing like a classic 303 the distortion effect make the difference, you can download the Behringer SynthTool app and create or save patterns and make settings easy but the most thing i like most its that you can connect it to the computer with usb or midi and sync with the DAW or work it like a midi controller and add every sound you like from any VST software! i have made a Youtube video about unboxing how to connect it check it out! 🙂✌
Nyttig · Ikke nyttigt · Anmeld bedømmelse
En "forkert" vurdering.

Synthesizers
There are a wealth of synthesisers available today, ranging from hardware keyboards to virtual software instruments.
Interessant tilbehør 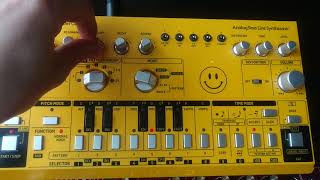