features forarbejdning
Sturdy, portable and good-looking Eurorack case
Robrecht, 12.04.2018
This is a sturdy and portable case and a great new Eurorack option.

I have no worries about it being dented or chipped during transport. It's basically one big metal shell, so my modules are safe. The wooden sides look nice, even though they're actually laminated fibreboard. I like the fact that the case is suspended in the air, it makes the whole setup look less heavy and massive than most cases. And you can angle it any way you like.

The aluminum bracket is light but feels dependable, and the hinges are tough. No qualms about carrying the whole assembly with it.

However, folding two cases shut while patched is not as self-evident as it seems. There's quite a bit of clearance thanks to those red translucent fold-out spacers (and in any case the bracket hinges stop turning at about the same distance), but if you have dense modules in the top and bottom case with the patch points lined up, any patch cables with a stiff base plugged into them will be in each other's way. I'd say with some planning and flexible cables you could leave a good part of a patch plugged in, but you may have to take out a couple of cables for transport. Something to be aware of.

The power supply is perfectly adequate, everything is working as it should.

One more thing: in early announcements from Arturia, the width of the case was advertised as 88hp. It is, in fact, 89hp wide. The threaded strip has only 88 screwholes, but there's room inside the case for 89hp worth of faceplates. Just shift the strip a little to the left or right inside the rail and mount one module with its faceplate extending beyond the strip.
Nyttig · Ikke nyttigt · Anmeld bedømmelse
En "forkert" vurdering.

features forarbejdning
Nothing much to say about a nice rack
Vivou, 23.05.2020
This product is, for a modular newcommer like myself, a good "all-in-one". I wanted something simple, that I can hookup to an other 3U or 6U arturia product to make things simple. Good build quality, instruction are not particulary clear.They give a lot of extras washers which is nice.

The feature that I enjoy a lot is the fact you can change the handle's position to set it up at different height, which is nice when you always change your studio setup.

Eurorack Housing Can be set up at different angles, Built-in bus board for up to 20 modules, Arturia link compatible, Aluminium housing with wooden side panels, Interior dimensions: 3 U / 88 HP,...

Eurorack Housing Can be set up at different angles, Built-in bus board for up to 32 modules, Arturia link compatible, Aluminium housing with wooden side panels, Interior dimensions: 6 U / 176 HP,... 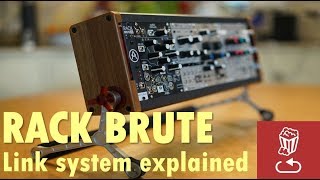 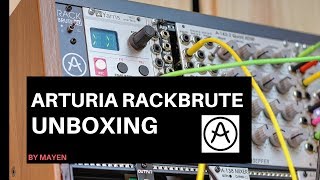 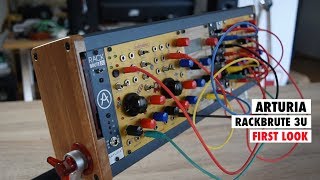