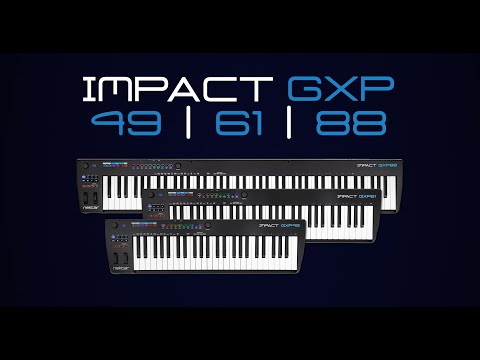 Übersetzung anzeigen
Original zeigen
Leider ist ein Fehler aufgetreten. Bitte wiederholen Sie diese Aktion später.
K
Review of the Nectar Impact GXP49 Kurzy 14.12.2021
The whole idea of buying this Nectar Impact GXP49 was that it should act as a "companion" to my dear Kurzweil PC3 LE3 (which I bought from Thomann many years ago!). So while my PC3 is rigged so that I am standing while playing, I wanted to have another keyboard that I could use when I need to sit down. So my plan was to get a controller keyboard with MIDI that I could put on a lower stand, and which then simply would play whatever sound was currently chosen on the PC3. This way, in theory, I would seamlessly be able to go from standing to sitting, and still be able to continue playing and composing.

So basically the only thing I cared for when I ordered the Nectar Impact GXP49 was the "feel" of the keyboard. My PC3 has, according to Kurzweil's own web page "61-note semi-weighted action with velocity and aftertouch sensitive keys (Fatar TP8)." So when I contacted Thomann to get a similar one to my Kurzweil, they pointed me in the direction of the Nectar Impact GXP model. The description of its keybed is "49 velocity-sensitive semi-weighted "full size" keys with aftertouch", so that sounded good. And according to the all reviews I read (for the GXP49, GXP61, and GXP88) before I ordered it, it sounded nice. So I ordered it.

When I received it, it looked great. The whole keyboard product (keys + knobs + casing + interior) felt heavy by weight, so it had some "ruggedness" to it. From a "total design" standpoint I was happy with it.

But when I started to play on the keyboard, it didn't feel great, not even good. The "action" was simply too loose. There was basically no resistance at all, to my feel. To me it felt more like a normal "synth-action" keyboard (i.e. a non-semiweighted keyboard) than a keyboard with semi-weighted action.

Note, however, that it is easy to play on (well, see below). I am not saying otherwise. If you want a keyboard more or less without resistance, this might do the trick. So if you are playing a very fast solo, for instance, that would be no problem, in terms of "getting the job done". My main concern is simply that I do not get the right "feeling" when I am playing. So I although I could play all those quick passages, it still feels like it is a toy.

As if that isn't enough, the GXP49 also features a strange physical shape for the black keys. Their upper surface is not parallel with the upper surface of the white keys. This is to say that each black key is like a mountain with its summit nearest to the keyboard player. This gives the black keys a strange appearance and touch (without even pressing them).

But the story doesn't end there. When I started to press down the black keys, I also discovered that they were *substantially* more resistant than the white keys. So not only are their physical shape strange, the actual playing on them also feel strange, especially in contrast to the white keys.

In summary then, this is no "companion" to my Kurzweil PC3 LE6. So I returned it, with Thomann's excellent assistance and help. And I am still not sure what to do now, in terms of getting some other keyboard. But time will tell.
Bedienung
Features
Verarbeitung
3
0
Bewertung melden