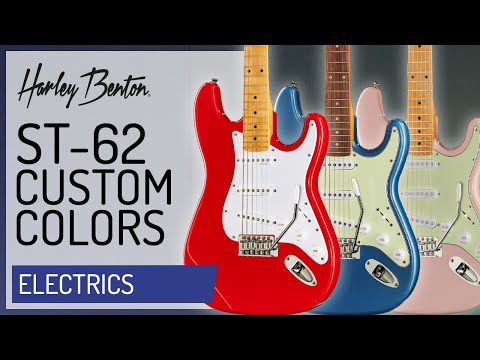 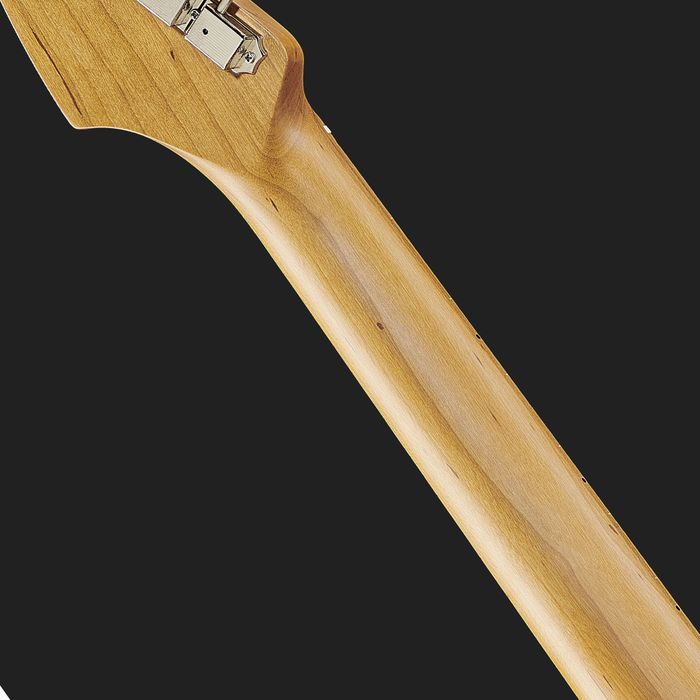 Übersetzung anzeigen
Original zeigen
Leider ist ein Fehler aufgetreten. Bitte wiederholen Sie diese Aktion später.
EK
Exceptional guitar, full stop (once you've set it up). Emlyn K Helicopter 21.01.2021
IN BRIEF:
This is one of the nicest playing, sounding and looking guitars I've picked up in 31 years, seriously. In fit, finish and hardware it's comparable to guitars 5-6 times the price. But it's also made in China for pennies, shipped halfway across the world and given a very brief once-over by the QC folks at Thomann so you WILL have to set it up yourself to get the best from it. But for this price, you can afford to either learn how to do it yourself or hire an experienced tech.

Having bought a Harley Benton ST-70 Rosewood Strat three years ago I was expecting this ST-62 to be a good guitar I'd have to do some work on (sharp frets, setup) with terrible/medicocre parts I'd need to upgrade (tuners/pickups). But, some fret/setup issues aside (see below), I'm happy to report that Harley Benton have made significant improvements in several key areas – notably the pickups, tuners and especially the pickguard.


BODY:
As noted in other reviews of this model, the colour bears little resemblance to the product photos. It's much lighter and also changes slightly depending on the lighting and angle, thanks to the subtle metallic flake under the mid-tone grey – looks great, although perhaps not the pronounced 3D effect you might see on a Fender. I happen to really like it but be warned if you're expecting a deep emerald hue as the photos might lead you to believe. Finish is flawless, as is the neck fitting.


NECK:
Narrow and chunky profile is very comfortable and resonant. Nut width is 42mm in common with higher-end Squires and Mexican Fenders rather than the wider 43mm(ish) of USA Fenders and most Gibsons. The neck profile is an unusually flat (for a Strat) 13.5” - I'm personally not of the opinion that this makes much difference other than it feels great and the strings don't choke when you bend them.

Neck and fretboard varnish is a very nice (and again, flawless) satin that to my eyes is tinted just right – not the anemic pale of modern Fenders nor the sticky dark gloss of some lower-cost Strats. The back of the neck felt a little powdery at first but this soon rubbed off after a few hours of playing. It's now fast and smooth.

The frets... now I was expecting the fretwork to be poor on a guitar selling for less than £150 and initially I was concerned about how scratchy they felt (and sounded!), plus some of the fret-ends were a little sharp. The scratchy finish completely disappeared after about 5-6 hours of normal use, and while I've smoothed off some of the worst fret ends with a small file, the issues have mostly vanished after a week. I wonder if this could be due to the neck shrinking a bit during it's long transit across the world during the winter and extended stay in customs (thanks, Brexit...) but then returned to normal after a week in a warm room? I'd certainly expect this with a rosewood fingerboard (which can dry out and shrink enough to leave sharp frets), but not so much with a maple 'board like this. Either way, the issues I had when it came out of the box are almost entirely gone after a week – so if you get similar issues with your ST-62 give it a little time before reaching for Thomann's complaint button.

Other than the initial setup (see below), all fretwork is level with no dead spots.


PICKUPS/ELECTRICS
These Roswell ALNICO single coils sound really good. I was fully expecting to have to upgrade but there's no point unless I want to use the guitar for metal – in which case a Hotrails in the bridge would do the job nicely. Tone is closer to Tex-Mex (ie. slightly darker and hotter) than vintage spec, and all five positions are eminently usable and distinct. Noise is low, other than the usual hum you get with single-coils.

Note that the pole-pieces of the neck pickup don't line up with the strings, especially on the 1st and 6th where they're out completely. This is an aspect you'll see on vintage strats and Mexican Fenders due to the use of a common bobbin size on all three pickups – while it's less noticable on modern USA Strats due to their wider necks. Slightly annoying aesthetics aside, there's an ever-so-noticable volume drop just on the high string – not enough to make be want to replace the pickup.

As if to make up for it, the staggered pole-pieces (all middle poles higher to match the fretboard radius) feature a slightly raised high-E pole on the neck pickup only. I might see if I can adjust it further out when I restring the guitar. But, again, this misalignment is something you'd find on almost every Strat ever made.

Special mention should be made about the smoothly finished, rounded tops of the pole-pieces. Less chance of the strings catching on them.

Incidentally, these Roswells are a massive improvement on the Wilkinson-branded pickups that came with the ST-70 from three years ago. Those are ok but a little bland, these are easily on par with the big brands.

Volume/Tone pots and 5-way switch are all solid-feeling, smooth in travel and crackle-free. Again, no need whatsoever to upgrade.


HARDWARE:
Another area I was expecting to have to upgrade was the hardware – namely the tuners and bridge. The tuners are easy enough to replace – Thomann sell a locking set that fit these guitars – but the bridge had me worried as replacement is not straightforward as the screw holes don't always match up to whatever 'better' bridge you might buy. I was especially concerned about the comically thin zinc block that the trem on these guitars come with, which, if you believe internet hype, is the cause of 99% of all Bad Tone.

Well, I'm here to tell you that this is not so. This trem sounds fantastic, deep and resonant, and it returns to pitch (after minor wobbles) without any bother at all. In fact, the tapering thick-to-thin zinc block allows you to go down all the way to floppy-string times like you would on a Floyd Rose, although as you might imagine this will more likely put the guitar out of tune. It also looks gorgeous!

Compared to the, I guess, higher quality Wilkinson trem fitted to the ST-70 Rosewood strat (with its reassuringly hefty steel block), I'd say this sounds and feels better. And, sonically at least, it beats the hell out of any locking trem I've ever owned.

Tuners are the vintage 'split' style, which in theory means you can lock the strings inside the shaft for a more stable result. Hmmm... they do feel a bit stiff and initially I had a great deal of tuning issues. But, since these issues pretty much vanished after 5 hours or so of normal playing, I think the real culprit is more likely to be that the strings the guitar came with (D'Addario 10-46) were not stretched when fitted. I'm not saying 'tuning an ST-62 doesn't', but I am reserving judgement for a few months and may upgrade to a locking set.

The two string-trees are of the largely useless bent-saddle type, one of which rendered even more so by the fact that it's installed in a slightly offset position. This is the only (and I mean only) quality issue I've encountered on this guitar so I can't in fairness deduct a star for it. As it is, its the unnecessary one on the middle strings so I've bypassed it completely. The string tree on the two top strings will be replaced by the far more sensible roller-type when I get around to it.


PICKGUARD:
Yes, a special category for the pickguard! I feel I should mention it for two reasons – the first being that this is a beautiful looking mint-green, three ply plate that genuinely makes a difference to the sound of the guitar. This I know because the ST-70 from three years ago came with a single-ply, black plate that was so insubstantial it may as well have been made from a bin-bag. I upgraded it to a proper one and that instantly had a huge effect on the acoustic resonance of the guitar. So, full marks to Harley Benton for finally listening to customer feedback and fitting a decent plate!

The other reason is that these come with not one but two polythene covers. I pulled off the scruffy, obvious first one when I unpacked the guitar but didn't realise there was a second, close-fitting laminate until a full week later. Reader, peeling that second one off was more satisfying than anything I can print on this family-oriented website.


SETUP:
Its all been roses so far, hasn't it? So, straight out of the box: the action was too high, the trem was set flat, the neck needed a tweak to get it right and the frets were scratchy and sharp. But once I fixed all that, it's a superb, near-faultless instrument. Should we deduct points because it didn't come out of the box perfectly set up? In my view, no. If you want that then buy your (waaaaay more expensive) guitar from a local guitar shop and if it isn't to your liking then you can ask them to sort it out before you take it home.

The guitar being reviewed here is one rung above the cheapest guitar you can buy, made in China and shipped via a mail order company you'll never talk to. As such, I wouldn't expect it to arrive with a half-decent, let alone perfect setup. And certainly, without any upgrades at all, I didn't expect it to sound, look and play as well as the Gibson Les Paul it's currently sat next to.

NOTE: this is my 35th guitar in 31 years and third Harley Benton. I've played countless other guitars, built a couple and broken a few more learning how to set them up. This one is currently my favourite.
Features
Sound
Verarbeitung
25
0
Bewertung melden