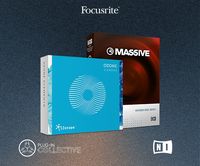 Übersetzung anzeigen
Original zeigen
Leider ist ein Fehler aufgetreten. Bitte wiederholen Sie diese Aktion später.
S
Awesome piece of gear SonicPeasant 19.10.2022
My home studio is centered around an older Clarett 8PreX Thunderbolt interface with a Presonus Studio 192 as extension plus now also this Clarett+ OctoPre as additional extension. I rarely record more than 1-3 channels at once, so I don't need 24 channels for tracking – ever. But it simplifies the use of outboard gear to not have to constantly repatch everything.
The only reason I bought this unit was that several reviews (as well as the specs on paper) said that it was even cleaner audio than the original Clarett I already had. I doubted that my less-than-golden ears would actually register any difference, but to my surprise they did. I have the distinct impression that the audio from this one is more pure even though I never had any complains with the sound of the older unit.
So now this is the main unit used for tracking, because it has the purest sound of the three.
A small tip: Took me a while to figure out that you can switch back and forth between the AIR mode and the Insert mode. It's not either or – it's just that the buttons have double function. You can first switch AIR on for the channels you want, then go into buttons mode = insert and subsequently switch insert effects in and out. That wasn't clear to me from the manual.
The only thing I miss on this unit is that there is no way to ensure 0dB loop gain for an output-input loop because the channel gain knobs also change the line level input gain. I prefer the solution in the Presonus Studio 192 where channel gain only alters the input gain for microphone and instrument level inputs while keeping a 0dB (unity) gain for line levels. That's much more useful for me, particularly for a stereo effects loop.
Also, I got audio dropouts when syncing the clock over BNC cable (which could possibly be something I did wrong, though I don't think so) but syncing over ADAT works perfectly.
All in all, this is an awesome piece of gear that I wholeheartedly recommend. The preamps are great and the sound is very clean.
Bedienung
Features
Sound
Verarbeitung
3
0
Bewertung melden

Übersetzung anzeigen
Original zeigen
Leider ist ein Fehler aufgetreten. Bitte wiederholen Sie diese Aktion später.
W
Solid performance WhiteDwarf 16.11.2022
Pros: All in all the Clarett+ OctoPre is a very nice and well sounding unit. The Air function gives sources a nice shine and the dynamic range is excellent. On drums it's punchy. Vocals are clear and open. Acoustic string instruments and percussion sits well in the mix. The HiZ inputs are fine as well. And the fact the you can use it as a standalone preamp or 8 Chan AD/DA I/O via Adat and WordClock is also a big plus! Sonically a great addition to anyone looking for good quality extension to their studio.
Cons: Small stuff, but I wish that line in, for when inserting external equipment, was fixed at unity gain - straight to AD - and not variable from the gain knobs.
And that the insert points per channel was balanced! But I understand that from a cost perspective and physical space on the back of the unit.
Lastly, it would have been nice when using external sync that the unit would auto detect the samplerate. You have to set that manually.
Bedienung
Features
Sound
Verarbeitung
0
0
Bewertung melden