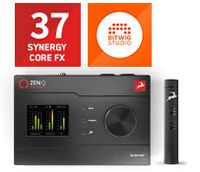 Übersetzung anzeigen
Original zeigen
Leider ist ein Fehler aufgetreten. Bitte wiederholen Sie diese Aktion später.
D
Great portable interface! Don! 05.03.2022
I purchased the Zen to use it mostly on the go when I don't work from my home studio. This includes pre-production sessions, recording, mixing and monitoring both on headphones and speakers. I like the fact that it is bus powered and very light. The metal chassis is a nice touch - the device feels solid and I am not concerned with damaging it. To carry it around thomann sent a great pouch that has been really appreciated. So far I used the interface for some listening sessions and one piano recording. The sound justifies the higher price tag, as the preamps and conversion sound clean and sweet. My only criticism is that I first wanted to go for the Thunderbolt version. Instead I picked the USB, as the Thunderbolt version doesn't include a TB lead. To be fair, considering the price Apple charges for these cables, it is understandable that they didn't include it with the device. But as USB also works for me I decided to save myself some money. Next I'll dive into the FX. Traditionally I have been very conservative when it comes to recording with plugins. But it is nice to have the option and to me this is just an extra on top of everything else the device comes with.
Verarbeitung
Features
Bedienung
Sound
1
0
Bewertung melden