Technical data of the microphone:

Vlastnosti Zvuk Zpracování
Rode NT2-A Studio Solution Set
Paul3259, 27.09.2015
First a bit of background on me. I have a home studio set up using Cubase and a Yamaha N12 mixer and use the equipment for song writing and demos. My live recordings are done in a less than ideal environment normally standing next to the desk.
I looked at various reviews and did a fair bit of detective work before I bought this and it seemed to be a little bit better than the NT1A which I was also looking at, for only a little more money. I use this mainly for vocals and occasionally for acoustic guitar.
A while ago when I worked in a studio I borrowed a number of different mics, AKG 414, Neumann U87 and did some A/B testing on my voice to see which worked best. A Shure SM58 in this context was the equal of everything else and that is what I normally use, live and for recording.
My SM58 gets a little noisy when I drive it hard to get a decent vocal level and I was really looking for something to give me an equivalent sound but with less noise. Also something that I could use to record the acoustic guitar which would let me push the levels when recording.
So, onto the review. The NT2A does exactly what I wanted. My vocals sound great with this mic. I’m guessing that it boosts a little to give some presence and so it’s not dead flat, but it’s a very musical sound. It’s also very very quiet and does not introduce any noise into the recording. I can really crank the gain and record at a distance from the mic and there is no hiss at all which makes it very easy to use. MY aim in buying this was to get something that I would not need to upgrade, and I think I have succeeded. I don’t think I’m going to need to change this unless I win the lottery and equipment envy gets the better of me.
When purchased with the kit, the mic comes with a shock mount and pop shield which is great, plus a bag to cover it when you are not using it to keep the dust out, which is a nice touch. The rubber in the clamp on my shock mount does not hold very well and I get micro phone droop where it does not stay level. Would be nice if Rode could design this problem out, but considering the price, I’ll live with it. When I get round to it I’m going to take it apart and put some gaffa tape or similar inside so it has more grip. Overall it’s a lot easier than using a separate pop shield as the pop shield is at exactly the right height.
I haven’t used the directional switching, or the pad switch but it’s nice as a feature. I have used the high pass switch and this does what it says, to ensure that the mic doesn’t pick up any low end stuff.
Overall, very pleased and I think its good value and will make my recordings better, and I would buy again.
Pomohlo mi · Nepomohlo mi · Ohlásit hodnocení
Ohlásit hodnocení...

Vlastnosti Zvuk Zpracování
Not worth looking to buy something more expensive.
Master Of BADUNEVICH, 27.07.2019
I bought Rode NT2-A Studio Solution Set for my home studio, and totally surprised with the quality and variability of the ways that I can use this microphone. I use it in conjunction with Ableton Live + Focusrite Scarlett 6i6. I can record from 1 to 4 or even 6 vocalists in one time due to three variable positioning polar pattern. Also i easily can record acoustic guitars, percussions like shakers etc. and even a piano.
As for sound quality - the recording is a little better I heard only at the Neumann microphones and old ribbon microphones - but it is another price category... The cable and pop filter that cames in set are okay! Very convenient when everything is sold in one set.
That was pros.)))

As for the cons - I can say that the microphone itself has no cons. But I think that the shock mount that comes in set is pretty flimsy, and I'm afraid it might tear. But maybe it's just my imagination.)))
And yes - the microphone sleeve looks really cheap - but who cares?...)))
I recommend this set to everyone who appreciates high-quality sound, and knows how to count money! Good luck! And long live rock'n'roll!!!
Pomohlo mi · Nepomohlo mi · Ohlásit hodnocení
Ohlásit hodnocení...

Vlastnosti Zvuk Zpracování
A really nice mic
AK808, 03.01.2018
I've been using this product for over 2 years now in my home studio, and I'm totally satisfied with it. I read about the features of it at the time of the order, and the product lived up to my expectations.

It is amazing how versatile this microphone is. I hook it up to my Steinberg UR44 audio interface , switch the phantom power on, and it is ready to record speech, singing, rapping, acoustic guitar, bass guitar from an amp, cajon, darbuka, various noises, or even low volume ambient sounds.

In addition to the Rode NT2 A condenser microphone, there are some other items in the package:
- a Rode SM6 shock mount with a pop filter (easy to use and adjust, and the pop filter part can be bent away in seconds if not needed)
- a 6 m XLR cable (I have never had any problem with it, the quality is great)
- a dust cover bag which comes really handy (I can leave the microphone on its stand and just put the cover on it)

All in all I am really satisfied with this product, and I recommend it to anyone who wants to have a solid all around condenser microphone in their home studio. :)
Pomohlo mi · Nepomohlo mi · Ohlásit hodnocení
Ohlásit hodnocení... 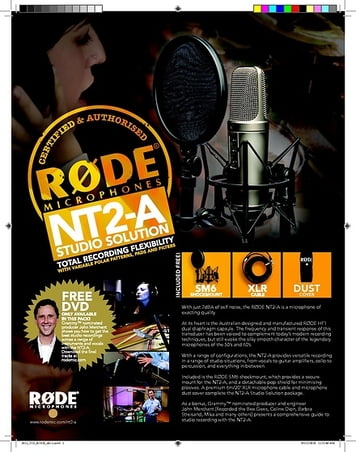 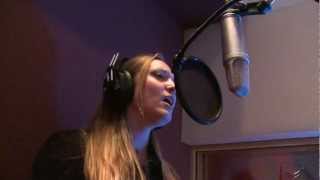 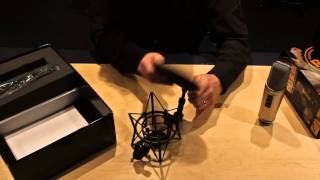 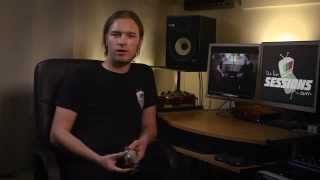 Zobrazit vše
Large Diaphragm Microphones
They pick up any sound! In this guide, we have tracked down the most popular condenser microphones for you.
Zobrazit vše
Brochure
PDF
Shrnutí recenze:
Zobrazit recenzi