Vlastnosti Zpracování Zvuk
The best KRK Rockit generation for today
Yurko, 13.12.2020
After my KRK Rokit 5 G2s broke down, which had been in operation for 12 years, I had to choose new studio monitors for my home studio. Unfortunately, while choosing right monitors I did not have the opportunity to listen to everything I wanted in my studio, local stores room acoustics did not allow you to fully experience the sound, but what exactly could be assessed regardless of the acoustic design is the constant noise level of the high-frequency speakers ... Despite the negative assessments of the noise level of the KRK G4 presented in the reviews, I noted the opposite for myself - no others were quieter than these. As a result, without thinking twice, I decided to make a forced upgrade from G2 to G4 (I had only one monitor out of order, if G2 were still on sale, maybe I would buy another one G2). The monitors are the same height as the second generation, but a little wider, about 1 centimeter, the "KRK yellow color" has become a little softer.
And now regarding the sound: for the sake of interest I decided to listen to the master tracks mixed on Rockit G2 and was amazed about how much more detailed the upper mids and high frequencies became and the width of the stage increased. Amazing! I am very happy about the choice I made.
There is an LCD display at the back, where you can make EQ adjustments - unfortunately, due to its limitations, this function, for me personally, is useless (maybe the built-in 16-band equalizer would be more suitable for this), I made all the room adjustments using other hardware-software (also did not even try to use the mobile application ). What's cool about this monitor is that now you can be 100% sure that the volume level of the monitors is set the same, there was no confidence in the accuracy of the position of the analog regulators in previous generations. Also, you can make the logo glow a little less, or turn it off, but (!) when they are switching to standby mode, dim settings do not matter, and the logo starts blinking from the absolute absence of glow to the brightest, doesn't matter wether dim mode is selected or not. I could not find any other cons. Everything is very, very good.
Pomohlo mi · Nepomohlo mi · Ohlásit hodnocení
Ohlásit hodnocení...

Vlastnosti Zpracování Zvuk
Amazing for the price
bager, 16.09.2021
Perfect sound — at least good enough for the things (post-punk) which I do.
Easy to model the sound and works good with the interface.
Pomohlo mi · Nepomohlo mi · Ohlásit hodnocení
Ohlásit hodnocení...

Vlastnosti Zpracování Zvuk
Soft but detailed as supposed to be for KRK.
JSound, 12.10.2020
As expected from specs, tests and graphics it has mids to listen and port is hard to overrate to, even 5-inch allows to work with bass/kick/guitar low area comfortably. Bass do not sound 80hz boosted as hifi, no brilliance atc. So I would say – yes they are pretty flat and 40k highs means no drop up to 20k for sure, lightweight and stiff kevlar cones atc… so overall I think they are good. Like build quality.
Pomohlo mi · Nepomohlo mi · Ohlásit hodnocení
Ohlásit hodnocení...

Vlastnosti Zpracování Zvuk
Great sound monitors
Stefan V. D., 13.10.2020
KRK Rokit RP5 G4 are really great home studio monitors. They have extended frequency range. There is a nice option to adjust frequency response according to the room. Sound quality is superb. I am using them to record, mix and master different genres and styles of music in a home studio. They are excellent also just for listening to music as there is impressive separation and definition of the frequencies and instruments. I definitely recommend these studio monitors.
Pomohlo mi · Nepomohlo mi · Ohlásit hodnocení
Ohlásit hodnocení... 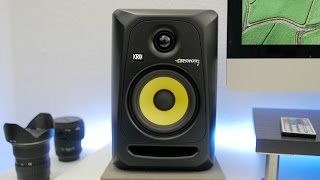 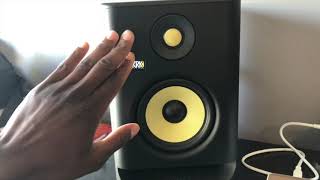