Zpracování Vlastnosti Ovládání Zvuk
Excellent little unit
Ian84, 24.07.2020
I bought this so I could plug in my guitar into my iPhone (using Garage Band for recording and Amplitube for effects and amp sims) for quick-and-dirty recording of ideas.

Since I also wanted to be able to use it with my own pedal board and MIDI keyboard through Reaper with various sample-based libraries I wanted it to have two inputs (stereo) and MIDI, so I would not have to buy two interfaces: one for my phone and one for a laptop. That's how I ended up at this box and not a cheaper iRig.

It's been a true pleasure to use. I haven't had any issues with latency or the like. The sounds on my phone or laptop are excellent with no detectable noise, and it provides a cost-effective interface that also doubles as an on-the-go recorder when used with a phone.

Since Garage Band is completely free and Amplitube comes with about 30 effects/amps/cabs (after the free upgrade that comes with the product) you can enough to get started with basic tracks of guitars and drums. Amplitube also has a drum machine included and you can export-and-paste it as regular audio to Garage Band. The amps are not all fabulous, but they are good enough for quickly recording ideas.

You have to use batteries and headphones when connected to an iPhone (8). The latter was not clear from the manual, but not a problem. It does come with all the cables you need to connect to iPhones or iPads, Android devices, USB, or Macs. That's quite neat, so you don't have nasty surprises when it comes to cables. Everything you need is included, including a set of batteries.

The only quirky thing in MacOS was the permission to access the microphone. Since I had no intention of singing I selected "no" initially, which caused no sound to be heard even though I could see the audio meters flare up when I strummed my guitar strings. I had to choose "yes" to hear the sounds from the device. That could have been mentioned in the manual, but after a bit of tinkering everything worked pretty much without any hiccups or issues.
Pomohlo mi · Nepomohlo mi · Ohlásit hodnocení
Ohlásit hodnocení...

Zpracování Vlastnosti Ovládání Zvuk
Does the job, but not well.
ostenreview, 18.10.2020
First off, this is an expensive product but don't think this will be your last & final purchase relating to it. The IK iRig thunderbolt connector cable snapped very easily, well that's 50€ extra. No IK iRig power-supply is provided, they use a non-standard 5V adapter, that costs 50€ extra also. Basically doesn't work on Android, which is OK, I use my old iPhone instead.

Record quality seems OK, indicators are non-descriptive and if the battery starts running out, the device just turns on and off incrementally.

Install the iOS App, well you gotta pay for add-ons.

USB powered? Nope, not if you use a mobile device.

They provide 2 AA batteries, because they want to up sell you on their proprietary power adapter. The batteries drain *very* fast.

Zpracování Vlastnosti Ovládání Zvuk
Great overall USB audio interface
HelpMeIAmLost, 10.04.2020
It's definitely not cheap, but for the price, this interface performs really well. It comes with different cable interfaces which gives you an option to use it on a laptop/PC via USB, or to an iPad via Lightning port. What's great is that it comes bundled with licensed software from IK Multimedia when you register it. The softwares can be updated as well. Their Custom Shop app gives you even more options to add plug-ins, not just for your mic, but also for your electric guitar and bass. The iRig Pro Duo I/O is made of plastic but it's solid and well-built.It has a matte finish that feels nice to the touch and prevents slipping.
Pomohlo mi · Nepomohlo mi · Ohlásit hodnocení
Ohlásit hodnocení...

Audio Interface For streaming applications with mobile devices or computers, Adjustable stereo RCA input for line signals, Level indicator with 3 LEDs, Connection for headphones or headsets with a... 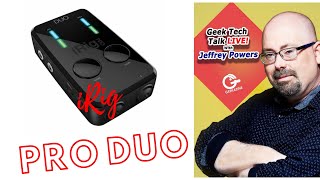 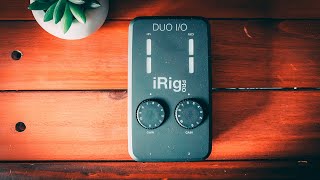 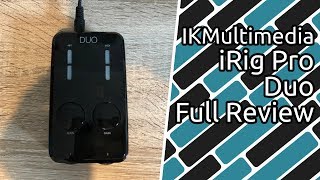 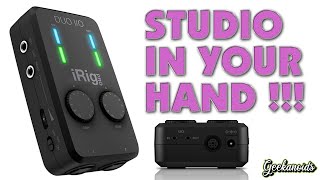