Vlastnosti Zvuk Zpracování
Nice even if you don't know the price
04.01.2017
Before you run away with any ideas that this is going to be better than a true Fender, it's not. Is it going to be better than a Squier? That's a tougher question. It can't compete with a Classic Vibe for quality, that's for sure, but if you had a choice of the TE-20 and the Standard Telecaster or an Affinity - and you were paying for it yourself - the HB starts to look very attractive.
The TE-20 is a classic T guitar, with two single-coils and simple controls. The black finish is thick but smooth and it looks really nice, especially when you realise that the grubby look of the pick guard is caused by the double layer of polythene film that just needs peeling off.
The neck is a 'C' shape and nice to use. It's very slightly deeper than that of an Affinity, but it's good for beginners and more experienced players alike. The rosewood fingerboard is a little bit coarse but mostly it just needs some lemon oil to rub in. It's not as smooth as a Fender, but then if you are playing chords you won't notice. The fretwork on mine was good, with only a tiny bit of roughness on the edge of a couple of frets. I thought about getting a file out but didn't think it was worth the effort.
The tuners aren't the best. They do work, so if you are on a budget you don't have to replace them, but they are vague and don't have much feel to them. I' bought some OEM Wilkinson tuners (19 pounds and 20 minutes' work) to replace them and they made a world of difference. It's much easier to tune and you know that it's going to stay there - bum notes won't be the guitars fault!
I did replace the string trees with cheap roller guides (3 quid) but even that isn't necessary on a term-free guitar and they look out of place on a tele. The originals did look cheap though.
The strings were fine but you will probably want to replace them with branded items. The other hardware is fine. The pick ups work well and the PUP selector and the vol/tone controls work OK, while never feeling that nice.
The action was pretty good out-of-the-box. I lowered the action a bit at at the bridge and gave it a bit more neck relief, but it was always completely playable.
As for sounds, yes, it plays well. It sounds enough like a tele for most people and can be used to play most genres of music pretty well as the pickups seem to have plenty of 'go' in them. Most people won't gain an awful lot by upgrading them, and they are at least as good as the Squier Affinity at one third the price.
If you are a beginner, you can buy this safe in the knowledge that it will do everything you want a guitar to do, while risking very little cash.
If you are a bit more experienced and just have a bit of credit rattling around you PayPal account, this is a ridiculously good buy - good tone, nice feel and a good basis for modifications.
Seriously, I've had more expensive curries.
Pomohlo mi · Nepomohlo mi · Ohlásit hodnocení
Ohlásit hodnocení...

Vlastnosti Zvuk Zpracování
oneandmillion, 08.06.2020
I am almost a total beginner, at least in the world of the electric guitar, so I wanted some starter pack to see where does it take me. So here we go.
The pack arrived fast enough, well packaged in pristine condition. Thumbs up here.

The guitar itself (the rest of the pack I will review elsewhere) was ok. The volume know was a little bent. I managed to straighten it with a little force. No major issue here, but not a great start.

The setup is a tad bit too high for me. especially the action on the first fret is high. It goes out of tune when pressed a bit harder.
The fretboard itself and the neck is really nice. probably the best part of the guitar.
Tuners are ok. It stays in tune so it works.
The intonation is good as well. Only the lower E is a bit sharper. But it is manageable. Considering it is a 3 saddle bridge it is actually good.
The sound is really nice (unplugged) and the cheap basic combo does not do any justice. There is some buzz, which is ok. and some scratchy sounds here and there which are hard to pinpoint. I wouldn't blame guitar but who knows.

Pickups are cheap as you would expect on the cheapest guitar out there. the bridge sounds nice though. The neck pickup is perhaps too quiet, I also notice the volume difference between the wound and plain strings. But I'm no expert here. Maybe this is completely normal however it bothers me a little. Especially on low volumes, I can't really hear the plain strings on neck pickup.
However, I really like the quaky sound of the bridge pickup. I think it sounds very nice.

All in all, I like the instrument. My only reservation is the high action on the first fret. I tried to take out the nut and lower it. But it seems to be glued or stuck there, so before I mess with it I'm actually considering returning it. 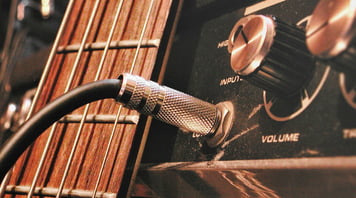 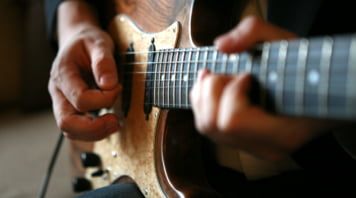 Zobrazit vše
E-Guitars
Electric guitars are ten a penny and nowadays there are at least as many models and makers to choose from. 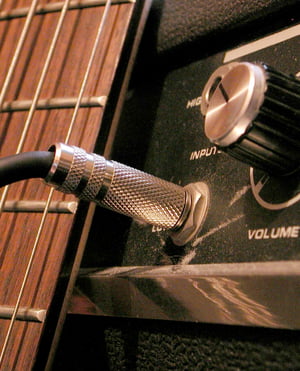