Zpracování Vlastnosti Ovládání Zvuk
Focusrite Scarlett 4i4 - Great interface for home studio and more
rEMAKER, 02.01.2021
I got this for my home studio to record guitar directly and for the midi capabilities for the future hardware synths I am planning on buying.
I have it connected with my kali lp 6 and it sound great.

When I was reading reviews for this sound card everybody was talking about how good the preamps are and I wasn't convinced until I tried them myself and they do sound great indeed.
The gain knobs for analogue 1 and 2 inputs light up and gives an indication when it almost clips(yellow) and when it clips(red) these colors can be be changed through the Focusrite control software.


Pros:
Great sounding pre amps
Great build quality you can take this to any gig without worries
midi in/out great for using with hardware synths or no DAW setups

Cons:
It would be really good if it had an indication of unity gain on the monitor control when everything is set to 0db on the software.
Other than that I don't see any other cons

Zpracování Vlastnosti Ovládání Zvuk
great features, but not reliable
omgedo, 20.01.2021
Overall a good package, not without issues however.
What I liked:
- good sound quality with little to no noise (didn't use it to record voice, however)
- awesome package (both the bundled software and regular giveaways from Focusrite)
- good (but slow) support from Focusrite

What I didn't like:
The first unit went dead after only a month of real usage, I didn't expect this in 2020. Focusrite support was most helpful, however it was a hardware problem so I had to send it back. Kudos to Thomann for handling the issue in a prompt manner, got my replacement fast even though I am not located in Germany. But that 'fast' still meant I was a month without an audio interface.
From what I read, this appears to be a common problem with 4i4. I don't I'll be buying Focusrite products again until they sort out their QA issues.
Pomohlo mi · Nepomohlo mi · Ohlásit hodnocení
Ohlásit hodnocení...

Zpracování Vlastnosti Ovládání Zvuk
Worked great for 10 months. Then USB died
RC-1290, 25.02.2021
- Pro: Probably great for use with laptops.
- Pro: Served me well when I used headphones only.
- Con: Had noise related to it being USB powered.
- Con: USB connectivity died after a rapid power cycle.

I initially used it with headphones only, with the idea to upgrade to proper studio monitors later. When I made that upgrade, I ran into noise issues. The ground hum was reduced by powering my PC from an outlet across the room, separate from my speakers, but there was still noise related to PC activity; low volume whine on mouse movements, higher volume noise during GPU intensive operations (e.g.: games).

So while it's nice to be able to power the thing off of USB, it's probably better for use with laptops than battery powered laptops.

I tried reducing the noise by injecting external power using Ifi's iDefender. Unfortunately plugging that in resulted in a fast power cycle, which killed the USB connectivity. Some quick searching showed that I'm not the only one who had one break after a quick power cycle.

It feels like a firmware issue, but Focusrite support (who are apparently very busy and hard to reach at the moment) consider it a hardware issue, and suggest an RMA. In the meantime it's just a pretty brick, with a nice button to enable a pretty 48V status indicator light.
Pomohlo mi · Nepomohlo mi · Ohlásit hodnocení
Ohlásit hodnocení... 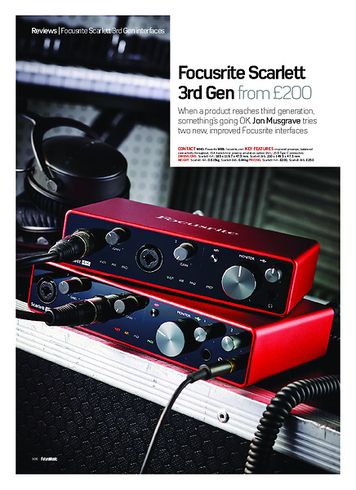 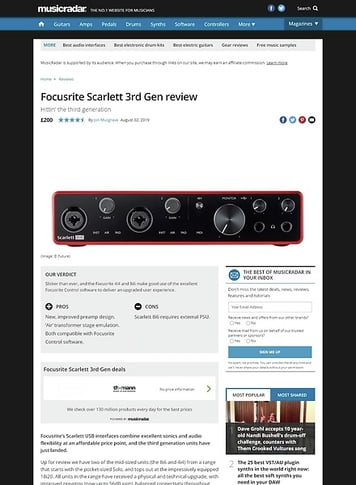