Ovládání Vlastnosti Zvuk Zpracování
A new amp to replace my 65 Fender Twin
Dysongs, 06.06.2020
Due to lockdown I have obviously not used this new amp on stage, and I think that it is only THEN that you really know what a new piece of kit can do and whether it suits your needs. However... my old 65 Twin which is really REALLY heavy was becoming unreliable and needed lots of money spent on it for repair and servicing. So I bought this new Fender Champion 100 XL to replace it on-gigs.

My first concern is how loud it would be. My old amp was really very loud and there was plenty of power there in reserve. So the first thing I did with the Champion 100 XL is turn it right up (in the living room) to test the loudness as this would be the obvious assessment as to whether it would be loud enough on stage for my club gigs.

I wasn't disappointed!!! My wife came running in to scold me and tell me that neighbours would complain even though we are detached and a good distance from the nearest neighbour's house.

I then ran thru the voicing selector a there IT was.....
that je ne sais quoi clean Fender sound of the Twin! I was very pleased. The sound was clear and slightly brittle which held the promise of cutting thru and dealing with the fact I play with one of the loudest (unmiked) drummers I have ever heard who we have to sedate on-stage to stop him making people's ears bleed!

The crunch sounds were very classy and seemed to respond well to gentle and heavy playing styles - with the more gentle strumming delivering recognisably defined chords.

The Brit sounds which I believe are purposely reminiscent of Marshall amps sounded quite authentic too.

I probably wouldn't use the High Gain/Metal voicings but I appreciated their grunge.

I tested the amp using my Fender Standard Strat, my Fender Strat Ultimate with Lace Sensor pickups and my Gibson Les Paul Custom. I was happy with the sound of all three thru this amp.

Lifting the amp was a nice surprise too - nowhere near as heavy as the old Twin, yet the Champion 100 XL still seems very robust and well made.

Next I checked out the effects section. Now there are two effects processors on this amp - one for each channel. The chorus was sparkly and metallic. But I probably would not use these on-board effects as I like to use my Boss GT10 pedal board with all my custom sounds. I think that the amp effects are a bit limited when it comes down to finding 'that' setting, but I am sure many others will find a good deal of satisfaction with these on-board FX.

The tone controls added noticeable treble, mid and bass and I thought these would be very usable.

Connector wise there is an Aux input which is cited as an input for your mp3 tracks to play along with. I intend to use this to input my Roland GR55 guitar synth pedal board which went thru the second channel of my old amp. Connecting up the guitar synth, the sound certainly seemed okay allowing the pre-set EQ on this input to provide a clear and balanced sound. But whether this will give me a good sound on-stage for the synth sounds I use, then we'll have to wait and see.

There is an effects send and return to connect up outboard effects thru Pre Out and Power In sockets.which

I read in the manual (just a single page of info in many languages) that the headphone sky can be used for recording and or sound reinforcement thru a PA. Presumably using this socket will cut out the sound coming from the amp's speaker. So the fact that there is no dedicated line-out feed is the only thing missing from this amp, although maybe if you used the Pre Out, this may provide what I feel is missing, but that is just an assumption and I've not tested it as yet.

I think that the amp is astonishingly good value for money at well under £300 and probably is a loud voice in the competition for other current combos, although just browsing thru these other products, I didn't see any amp rated at 100 watts. 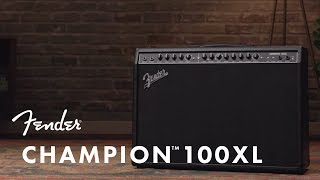 Zobrazit vše
Guitar Amps
The following pages give an overview of the various types of guitar amp available.