Ovládání Vlastnosti Zvuk Zpracování
More fun the more I learn
Bjørnar, 13.11.2019
I'm new to modulars/semi-modulars. When I received the Crave and started playing with it, my first thought was "Ok, this thing is a liiiitle bit more basic than I was expecting" - but that didn't last for long.

Cons:
- A 6.3mm TRS jack output would have been nice instead of the 3.5mm TS in the patch bay
- Input level of "Ext. audio" is -5V to +5V (that means the output from other line-level gear will be very low in volume
- Maybe I'm just doing something wrong, but I wish the sequencer would act more like a 303 when setting the gate length to max (the notes don't quite merge with the next note when gate length is 100% and glide is on, there's a tiny gap)
- Thomann's product page for the Crave says it has an ADSR envelope, but it's actually ADS
- On my unit the D# key on the sequencer "keyboard" is a bit more difficult than the rest. It has to be pushed exactly in center to trigger, unlike the rest of the keys which trigger both in center and sides. I assume this something that can be easily fixed by re-adjusting the placement of the plastic keys slightly. But I won't try as it's not too bothersome so far, and it might just fix itself after more use.
Pomohlo mi · Nepomohlo mi · Ohlásit hodnocení
Ohlásit hodnocení...

Ovládání Vlastnosti Zvuk Zpracování
Solid synth with fantastic features.
PeterMcD, 25.11.2019
Since my Crave arrived a couple of weeks ago, it's had much more use than any of my other synths. There's just something about the immediacy of the interface, the simplicity of the single oscillator and the gorgeous creamy sound of the ladder filter that makes it my go-to synth.

I've got other monosynths, but none of them sound any good without effects added on. The Crave just sounds fantastic as it is.

I ordered extra patch leads but I needn't have bothered. The six that comes with the Crave is more than enough. The only quibble I do have is that mine shipped with a European power supply when I live in the UK. But it's one of those power supplies that allows you to slide on a different connector depending on which country you live in. I've written to Thomann and I assume they'll ship the right one soon.

But that's a small issue and I'm sure Thomann will resolve it soon. If you're thinking about buying one, stop thinking about it and just buy it. I guarantee you, you won't regret it. It has to be the best value for money on the market.

Addendum: Thomann's customer support tell me that because their Craves are intended to be sold in Germany, they only come with the European connectors. This was a bit disappointing given that they have a UK facing website and some proportion of their business is with the UK. At the very least, I would have expected them to tell me how I could actually get a working power supply -- even if that meant buying an add-on.

If this is important to you, you probably want to buy your Crave in the country where you live rather than from Thomann.

Additionally, the gate length function doesn't work on mine, so it's probably going to have to be returned. I initially thought it was probably an issue with firmware, but I'm on the latest release and it still isn't working. That shouldn't be a deal breaker though. It's still a great synth and astounding for the money. I want a replacement, not a refund.
Pomohlo mi · Nepomohlo mi · Ohlásit hodnocení
Ohlásit hodnocení... 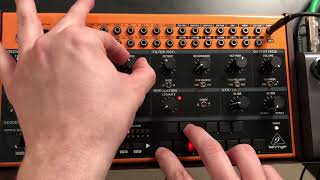