Percussion instruments are certainly among humankind's oldest. It is not difficult to imagine early humans beating sticks, bones, or rocks against each other to produce sounds. You can observe this basic drive towards "playing percussion" with toddlers today. If they get their hands on a stick or rod, they will happily beat something, anything, with it. If they happen to hit an empty bucket, producing a hollow sound, they will repeat this full of enthusiasm again. And again. And again...

There are images dating back to antiquity which prove beyond doubt that drums existed in Egypt and Mesopotamia as long ago as 4,000 years. Researchers have pointed to the enormous importance of drums among many indigenous peoples. Sometimes they are ascribed magical properties, sometimes they play a part in rituals, sometimes in communications. 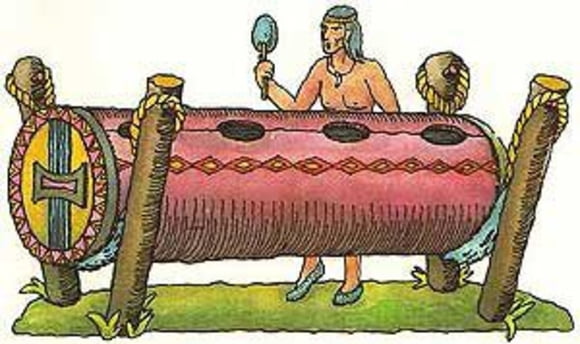 Even the shape of the drum is determined and has remained almost exactly the same. A round wooden body (a hollowed-out tree trunk) and the skin stretched tautly across it together make a larger – or smaller – air column vibrate. This principle can be translated without alteration to our modern drums, Today's drum set features a mix of membranophones and idiophones. Membranophones are instruments which produce sound when their taut skin or membrane is beaten, which makes the air column below vibrate. Idiophones (literally: self-sounders) are instruments which, when struck, vibrate themselves and thus produce sound.

This means that the drums covered with plastic skins (natural skins used to be the material of choice) are the membranophones in our drum sets, and cymbals the idiophones. Such percussion instruments have been part of European orchestras since the eighteenth century. They have also become more and more important in military marching bands, probably because their tight rhythm lends itself better to marching in formation. What is special about this use of instruments is that they are played by a dedicated musician each. You can still see this in our modern symphony orchestras.

When other genres of music, such as blues and swing, gained in popularity at the beginning of the last century, both the role of the percussion section and how it was played changed. The individual elements, such as the large drum, small drum and cymbals were now grouped together and played by a single musician. This offered great advantages, since the drummer's experienced hands could now fuse several individual rhythm elements into one complex overall rhythm. This also meant, however, that the drummer became a much more important contributor to the overall sound.

The drum set, then, was indispensable to the jazz and big bands, the swing combos and the dance orchestras. Drummers became the manual labourers of music, always busy, not a moment's rest. Not only did they use both hands, their feet were also kept occupied. Drum makers had come up with ingenious machines for the feet. The foot pedal, for instance, for the large drum. Whenever the drummer stepped on it, the attached mallet would beat against the large drum's back skin. But our drummer also had to replace the guy who in the old-time orchestra used to bash the cymbals together.

A second machine helped him do this – the hi-hat, once called the Charleston machine. Again, he only needed to step on a pedal to make the cymbals touch and complete the texture of the rhythm. And whereas the trumpeter did actually get to take a break every now and then, our drummer had to keep playing without stop.

This has remained the case ever since. In rock bands, too, the drummer is continually at work. The fundamental structure of the drum set has likewise remained identical for decades. Of course, the shapes and technical details have undergone sometimes significant developments. Stability, durability or tunability have long ceased to be problems for modern drummers. And development continues steadily...