The bigger the diameter of the shell, the more focus has to be put on dampening in order to get a handle on the unwanted part of the overtones. The kick drum would be an extreme example – you put a cushion in it. There are 3 approaches to dampening – built in, on the head and on the shell.

Dampening in the drumhead

This variation employs one ore more sound control rings on the inside of the drumhead. The bigger the drum head, the more this method is used. A very good example is the Powersonic by Remo. It has 2 inner control rings. They enhance the low end without building up.

Another internal solution is the before mentioned oil fill. The oil plays an active roll as a dampener. At the same time the oscillating mass gets higher – the tone lower.

Dampening on the drum head.

This is mostly applied as an extra. Live gigs or studio recording for instance come to mind. The task is to adjust the sound by putting more or less dampening material on the drum heads. Sometimes a tissue and some Gaffa tape will do the job. This is however a rather inelegant approach and also minimizes the playable area of the drum head. On a 8” or 10” tom this can really cause a problem. It better to use sound control rings. They are approximately 2cm wide plastic rings, that just sit loosely on the outside of the drum head. Sound control rings come in sets for the most usual tom sizes. They are excellent to use on a snare drum in particular.

The Powersonic head we were talking about earlier also has an external cushion, that can be attached with buttons. Evans has developed a similar external dampening system called “EMAD”.

TIP: Sound control rings are readily cut from old drum heads. Old pinstripes are best – not only do you get 2 rings from one head, the line to cut along is already on them.

Dampening on the shell

A foam ring is put between shell and drumhead. The result is an excellent if not extreme grade of dampening. This is best used on the resonate head of the kick drum. 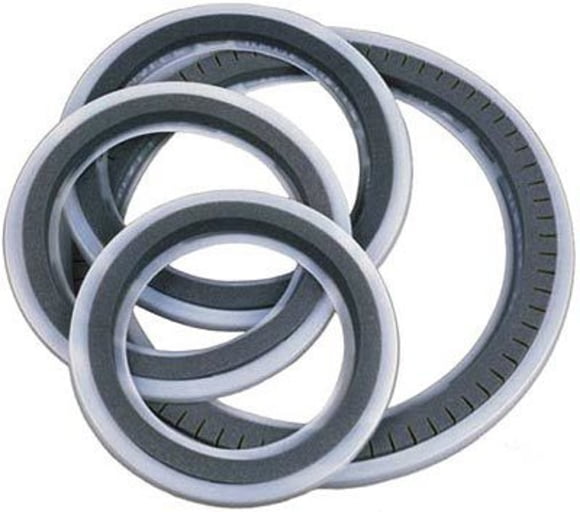 Another internal device that dampen on the shell are felt pads, that get more or less pressed against the drum head by an adjustable mechanism.

Both offer a certain dampening and slightly enhance the low end. The tone becomes more focused however. Most of all they lend the drumhead more durability. Often used on a snare, which gets beaten up most anyhow. The reverse dot is glued to the inside of the head. The advantage is a more even play and more consistent rebound compared to the “on top” dot.

Falam patches for the kick drum serve the same purpose – more punch in the beat and the head lasts longer.

TIP: Tip. You can also use a length of Gaffa for the kick drum. An (expired) credit card underneath delivers an excellent attack. Make sure to have the writing to the outside.