- Aux input. This is really handy for plugging my phone in to play along with things.

Things I don't like that much:
- The 'on' button is quite small and recessed a bit, which makes it a bit fiddly to press. You need to hold it for a couple of seconds to turn it on and off, so I've never bumped it and accidentally turned the amp off - nothing wrong with the button, but I just don't like it that much.

- It feels a bit plasticky in general, which is to be expected since it's made from plastic and is nice and cheap. Again, this is a really minor thing, and the amp doesn't feel flimsy in any way.

Other things:
- It has a few built-in effects (chorus, delay and reverb) with a couple of different presets for each. I used them a bit when I first got the amp - they sound fine - and then I've never used them again, so no strong opinion either way.

Overall I really like it. It's nice having the option of different channels, and the sound is great.
Helpful · Not helpful · Report
Report rating…

Send report
handling features sound quality
Not really what I had in mind
John P., 15.03.2021
The item is inexpensive and does function. I wanted something for clean jazz sound and find this device not for that.
But if your into dirty sound it is fine.
Helpful · Not helpful · Report
Report rating…

Send report
handling features sound quality
Not cheap but essential!
Humble82, 26.09.2020
I have a Vox version and this is far, far better. Sounds great, very compact, works equally well on electric, acoustic and I discovered it also works brilliantly on a ukulele.

Get one!
Helpful · Not helpful · Report
Report rating… 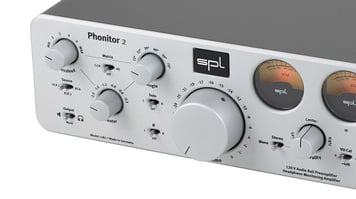 Headphone Amps
All you ever wanted to know about the small helpers called headphone preamps ... can be found here
Interesting Accessories

Show all
Headphone Amps
All you ever wanted to know about the small helpers called headphone preamps ... can be found here
test results:
Read review